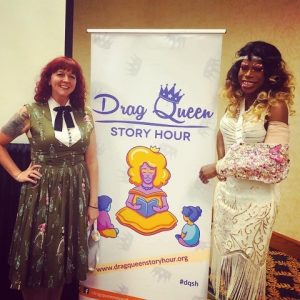 BY MARCY SHORTUSE – Island native turned New Orleanian Seale Paterson was recently honored by the Louisiana Library Association with the 2020 Alex Allain Intellectual Freedom Award. This doesn’t come as a shock to those who know her, as she has devoted her career to the New Orleans Library System for more than 20 years. The reason behind the award, though, is quite interesting.

Seale received the award for her work with a project she instigated at her place of work – the Cita Dennis Hubbell Library in Algiers Point (a New Orleans neighborhood). The project is called “Drag Queen Story Hour,” and she has been running the program since 2017. She is, in fact, the first New Orleans librarian to bring the program to town.

The idea originated in San Francisco in 2015. In 2017 a presentation was given at the American Library Association’s annual conference in New Orleans about this unique and fun way to reach parents and children. It teaches not only that accepting and respecting everyone should not only be a part of who they are, it also shows that people who have alternative lifestyles are just normal, every day, fantastic people. Of course, being the library manager at Hubbell, Seale was in attendance. The idea struck her as a possibility for her programming, and since then its popularity has taken off.

“I’m pretty sure I was the first librarian in Louisiana to host a DQSH (or at least among the first), and then I really pushed it at NOPL (New Orleans Public Library) and got a number of branches to host it,” she said. “I also spoke on panels at the American Library Association annual conference as well as at the NLGJA – the National Lesbian and Gay Journalists Association — annual conference. So all that was the “promotion of intellectual freedom” part of this award.”

For the kids who come to story hour, the storytellers present a visage they are very familiar with. Gaudy costumes, glitter and glitz and over-the-top performances are a part of daily life in New Orleans, and not just during Mardi Gras. The whole theme of the program is to be true to yourself, and to be happy. Children and parents alike are riveted by the readers, some of whom are quite famous.

Seale first went to New Orleans for a weekend trip when she was a student at Florida State University, and she immediately realized it was where she belonged. She started with the New Orleans Public Library more than two decades ago, and has managed the Hubbell branch in Algiers Point since 2006. She has held six story hours at her library since then prior to the shutdown from COVID-19, and has more story hours scheduled in the future. She also serves as the coordinator for many of the Drag Queen Story Hours held at various libraries and other locations across New Orleans.

The Hubbell Library is New Orleans’ oldest public library, built by Andrew Carnegie in 1907. Seale worked at another branch of the library system until Hurricane Katrina. When the storm passed and things re-opened, she was transferred to the Hubbell Library.

“You can feel the magic in the air here,” Seale said. “Moving here was the smartest thing I ever did.”