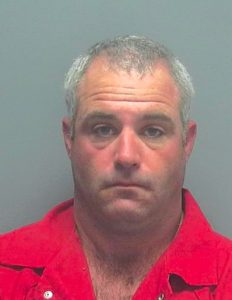 An island man was arrested last week after Lee County deputies found him in possession of more than 20 grams of marijuana and paraphernalia, as well as a weapon and ammunition.

According to Lee County Sheriff’s Office reports, Peter Brownell O’Brien, 37, with a last known address of 800 E. Railroad Ave., was pulled over at 10th Street and Gasparilla Road after a resident in the area called on him for behaving erratically.

The deputy reported that as he arrived in the area, he saw O’Brien pull out from a side street and eventually stopped him on Gasparilla Road near 10th Street after watching him swerve all over the roadway. When the deputy approached the vehicle, O’Brien told him there was an ant in his ear, and the deputy did in fact witness a large ant crawl out of his ear.

Upon searching the vehicle, the deputy also found a box of .38 caliber ammunition with 35 rounds inside in the glove compartment, a black duffel bag containing more marijuana, a Smith & Wesson .38 and a small bag containing 24 rounds of .38 ammunition. The gun and ammunition were taken from O’Brien’s possession.

The green leafy substance that appeared to be marijuana field-tested positive as such, and O’Brien was transported to the Lee County Jail for processing. O’Brien was released on May 7 after bonding out, with a court date of June 4 scheduled.

On Thursday, May 3 an island resident who resides in the 100 block of Gulf Boulevard contacted Lee County deputies regarding a misdemeanor theft.

According to reports, the complainant signed a waiver of prosecution against a cleaning woman who had routinely come to clean the home.

The complainant explained to the deputy that money had been missing from a money clip in the home and from a purse in the home over a period of time. (It is unknown exactly how much cash was taken over the cleaning woman’s two years of employment.)

No charges have been filed at this time, but the complainant does intend to prosecute.