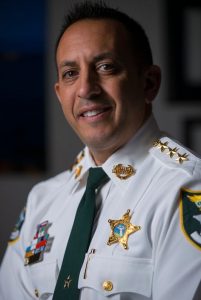 BY MARCY SHORTUSE – Lee County Sheriff Carmine Marceno was the guest at a special fundraiser here on the island recently and got a check from a very special contributor for his election fund.

Some contributions came in after the reception was over, including one that was very special. The $1,000 check came from former President George W. Bush and his wife, Laura.

Marceno was floored when he saw the name on the check.

“I have the greatest respect for him, and for the First Lady,” he said. “I was completely humbled and speechless.”

”It was a great event,” Marceno said. “I always love it when I have the chance to see some of the Boca residents. I never met the President, but I do know he loves Boca Grande and visits frequently.”

When former Sheriff Mike Scott announced his abrupt retirement in the fall of 2018, Marceno was appointed by Gov. Rick Scott to fill the position. He is running in this year’s race against two other candidates – James Leavens, a retired Lee County Sheriff’s Office major, and Michael Lee Qualls Jr.