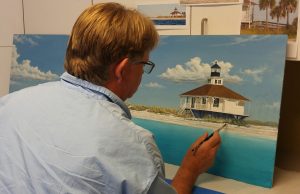 The Island Art Days Fine Art and Craft Show is planned for this Saturday, March 17 and Sunday, March 18 at 431 Park Avenue in downtown Boca Grande.

Sponsored by Gasparilla Outfitters and Special Effects, the 2018 featured artist is Steve Whitlock.

He was born in Tampa in 1959 and raised in Naples. Growing up fishing and hunting with his dad, stopping often along Tamiami Trail to fish for bass and bluegill, his lifestyle shaped a lifelong love of the outdoors.

He served four years in the Navy, and he later decided to earn his captain’s license and made a living doing what he loved.

Steve graduated from Ringling College in 1998, earning a bachelor of fine arts degree as an illustrator. Since that time he has focused on game fish and wildlife art. Around 2000, he began illustrating game fish and marine art on navigational charts.

“I work in a variety of media. But I chose acrylic as my medium of choice due to the ability to use the fast-drying medium transparently,” Whitlock said.

This will be the first time Steve will be showing his work in Boca Grande.

“I love what I do, and I enjoy making pieces that many people are able to afford,” Whitlock said.

Many charts are posted on his website, so customers can get an advance look at his work. Some of his Whitlock’s work is available at Bass Pro Shops retail stores.

Students often purchase a print of his work and work under Whitlock’s guidance.

The artist also does charity events for the Florida Cancer Center, Wounded Warriors and some other organizations.

He doesn’t have much spare time to work as a fishing guide these days, since he is on the road about 30 weeks each year for shows.

Organized by Julie Salvetti and Linda Welch, this is the 13th year the show will take place.

Salvetti founded the event 13 years ago, when she teamed up with Robin Melvin of Gasparilla Outfitters and Special Effects to sell her artwork at the store.

“It started out with just a few artists, and this year we’ll have more than 15 exhibitors who will be at the show, so we are very excited.” Salvetti said. “Some are returning artists and some will be new this year.”

Locally known as “The Pearl Girl” since she chooses to focus on using pearls in her jewelry design, Salvetti started designing jewelry in the 1980s.

“By using the only gem born in the body of a living organism, when someone purchases a piece, it is the energetic transfer of living art,” Salvetti said.

Attendees are encouraged to come meet and talk with the artists from 10 a.m. to 4 p.m. in the parking area, where the artists will have their work on display.