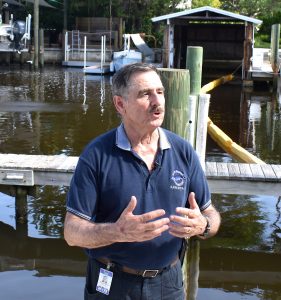 Mote Marine Laboratory scientists were on Damficare Street on the morning of Tuesday, Aug. 14 to field-test a newly developed method for mitigating Florida red tide (elevated concentrations of toxic Karenia brevis algae) in the closed end of the canal.

Scientists at Mote have created and patented an ozone treatment system that is being used to remove red tide cells and toxins from seawater entering Mote’s Aquarium and Mote’s animal hospitals in Sarasota.

They brought equipment to do field- testing in Boca Grande this week and took water samples back to the laboratory to test how well the machine could remove red tide from canal water.

The pumps take raw water from the canal and filter it through two contact units, which are patented by Mote.

“The ozone generation system consists of an air compressor, oxygen concentrator and a commercial ozone generator, all confined in an air-conditioned trailer as a portable unit,” Pierce said. “Ozone from the generator is injected into water pumped from the canal into a Mote patented enclosed contactor chamber, where the seawater is treated with ozone and the purified water passed back into the canal.”

The water is moved at approximately 200 gallons per minute.

The testing was done with permission from the Department of Environmental Protection.

The method uses ozone to destroy K. brevis and its toxins inside a special system that releases no ozone into the environment and restores oxygen that is often deficient in Florida red tide areas. This technology is designed for areas of limited size and tidal flow, such as dead-end canals and small embayments, where Florida red tide algae, their toxins, and resulting dead fish can accumulate.

Mote scientists and facilities staff tested the ozone system with seawater containing Florida red tide algae in a 25,000-gallon pool at Mote’s Sarasota campus, completing final tests in June 2018. Results showed that, with one ozone system processing 150 gallons of water per minute, the red tide algae cells in the pool were wiped out rapidly and their toxins cleared in approximately one day. Water quality was monitored to ensure safety; ozone was not released, and other water chemistry changes returned to normal within approximately one day.

“That depends on what we find out here from these samples,” Pierce said. “This is an experimental learning process, and when we understand what is happening here, we’ll do this in another canal.”