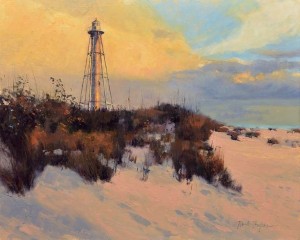 Interested in a beautiful piece of art by Neal Hughes? This beautiful 22 inch by 26 inch portrayal of the Range Light will be up for auction at the Barrier Island Parks Society Green Gala, to be held on Friday, March 18, under a tent at the Boca Bay Pass Club.

Neal Hughes is a graduate of The Philadelphia College of Art (University of the Arts) who resides in Moorestown, N.J. A former illustrator, Neal has been painting professionally for more than 30 years.

The painting will be on display at Hughes Gallery (in the Island Bike n Beach building). Stop by and take a look and, if you’re very serious, Barbara Hughes, the gallery owner, said you can take it home and try it out.

The value of this framed work of art is $4,500. Call Hughes Gallery at 964-4273 for more information about the artist or the painting.