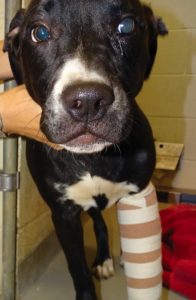 A local rescuer is looking for help with a new dog who has had a very rough time. Blanche Vedette, co-owner of The Loose Caboose and founder of the nonprofit rescue effort Tank’s Legacy, recently traveled to Hernando County to pick up the little black-and-white terrier mix who didn’t have a prayer at the time. Here is Nora’s story, in Blanche’s own words:

“Nora is a very sweet little girl that came from Hernando County. The animal control officer had emailed rescue groups asking for help with her and another puppy. The other pup had mange and was pulled by another rescue. That left little Nora. We knew her leg was broken, but I was fairly confident that Lemon Bay Animal Hospital could fix her. I did wait until the next day to see if another rescue would come forward, but no one did. When I got the final plea from animal control, I said yes.

“Nora was supposedly hit by a car, but she didn’t have road rash or any other injuries that are typical after a run-in with a car. When she saw the vet at Lemon Bay, they said it was more consistent with her suffering trauma, like being kicked really hard.  Her injuries were beyond what they could help, so we contacted another vet and forwarded her x-rays.  He got her in for surgery the next morning.

“Nora now has a plate and screws in her leg to fix her fractured radius and ulna. The vet also said that her injury was older than we had been told. Nora’s leg had been broken for about a week before she was taken to the shelter. I can only imagine the pain and fear she suffered.

“I am very fortunate that they take payment plans from rescues. I have until June 1 to pay off the remaining $1,300 for her surgery.

“This is going to be a very long and difficult recovery for her. Her leg is very swollen, because she had been so long without care. The tissue was trying to heal, and Dr Kirsch didn’t want to damage the healing that was going on. Her prognosis is very good, but we have to strictly limit her activity so no further injuries occur. We would love to have some toys and chews for her while she is recovering and would also appreciate any puppy pads or puppy food for her. Good nutrition is very important when they are growing and developing, but especially critical after surgery.

“Nora is believed to be a retriever/Boston terrier mix. We’re not really sure what she is, but we do know that she is cute. She knows ‘sit’ and ‘off.’ Nora is about eight months old and 40 pounds, and she is about as big as she’s going to get. She is scheduled for spaying on May 31 and will be ready for a forever home after that. If you know of anyone looking for a wonderful little girl, please tell them about Nora.”