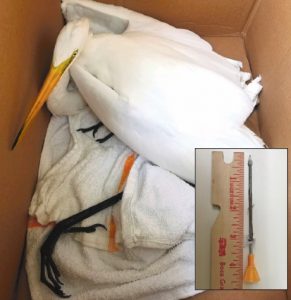 Local deputies responded to an unusual and horrible call on Saturday July 13 at 1st Street near the Boca Grande Community Center.

At approximately noon the deputy was notified of an injured white heron. The person said that it appeared the bird had been shot with a dart from a blowgun. Prior to the deputy’s arrival, the caller pulled the dart from the bird’s leg and threw it away. The bird was conscious and alert at the time of the call but seemed to be paralyzed. No blood was found on the bird.

A local wildlfe rescuer was contacted, and after photographs were taken, he took the bird to the Wildlife Center of Venice for treatment. Meanwhile, the dart was retrieved from the trash and taken into evidence.

The Florida Fish and Wildlife Conservation Commission was notified of the incident and will assume the investigation for animal cruelty.

If you have any information as to what might have happened to this heron, please call the Sheriff’s Office at 964-2400.