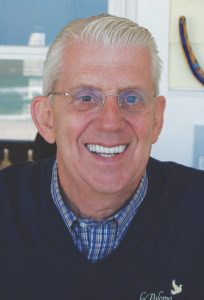 BY MARCY SHORTUSE – The last quarterly meeting for the Gasparilla Island Bridge Authority in April went by very quickly, which is unusual for a GIBA meeting. With the bridges and new tollbooth built, there wasn’t much on the agenda to talk about except the normal financial rundown and a little follow-up on the new toll card program that will soon be in place. It was strange in its silence, particularly regarding one factor: It was David Hayes’ last meeting. He had served on the board since 2010, and became chairman in 2012. That’s a long time to serve.

Under Hayes’ chairmanship the majority of the bridge replacement project took place, on time and on budget. The board was well into getting ready to tackle the swing bridge project in 2015 when he was voted out as chairman and Ginger Watkins was voted in.

If it seems like a strange move to change chairman horses in midstream during such a huge project, you aren’t alone in your thinking. Nonetheless, Hayes continued on as a board member until this year, when his time has run out.

He is also moving off the island, which is more than likely very bittersweet for him. When he first commissioned Casa del Sol to be built on Gulf Boulevard, it was more than a pet project to him. He examined every detail of the house, right down to the placement of an upstairs window that lined up directly with the Range Light. Construction of the beachfront home began in November of 2007 and was completed in October of 2008. Contractors used reclaimed wood from factories and old schools for the pecky cypress rafters of the home. Everything was as energy-efficient as possible, right down to the tankless water heaters. Every window in the house has a view of the water. He and his wife, Patty, considered it to be their “dream home.”

David came from a modest home in Toledo, Ohio. His father was a plastering contractor, and he was one of five children. He went to Vietnam and did his service for his country, and when he got out he started working for a man in his home state who later became his business partner. David eventually bought that company, Midwest Stamping, from the man. It was one of the strongest automotive parts companies in the world, and one of the reasons for that was because David implemented an Employee Stock Ownership program. With the exception of one, every employee who was there when David took ownership stayed for another 30 years, and he credits the ESO program for playing a big part in that.

David has never been afraid of decision-making or hard work, and it shows on his resume and in his work with GIBA.

One of his first personal orders of business was to make sure everyone understood the severity of the scour issues on the south bridge. While a lot of talk precipitated the beginning of the bridge replacement project, David was always front and center with his continuous reminders that the experts were telling them to fix the south bridge situation immediately.

In 2013 when David was re-elected as chairman it was Board Member George Baker who summed him up quite well.

“He’s difficult, obstinate and he’s doing a hell of a job,” Baker said. 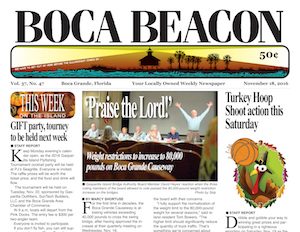 In April 0f 2013 David and the board faced another jolt as Executive Director Jim Cooper walked away from his job after many, many years. Luckily his assistant and accounting manager, Kathy Banson-Verrico, had been following along with the daily goings-on at GIBA and was able to immediately step in and act as interim director. David stood behind her 100 percent when the decision was made to make her acting executive director, and to this day it is apparent that was a decision well made.

During his time as chairman the two fixed bridges of the Causeway were completed ahead of schedule and on budget. The swing bridge project plans were already underway when in January of 2015 the board voted to have Ginger Watkins pick up the chairmanship instead of David. Their reason was that David had performed well for many years, and that he needed some rest, to which he replied his famous line, “I’m not tired.”

In February of 2015, just one month later, the talk about the possibility of keeping the bridge load limit at 40,000 pounds after the swing bridge was complete came up in a public meeting. David was one of the board members who didn’t understand why there was any reason not to raise the load limit to the FDOT traditional 80,000 pounds, and he went around and talked to every island business to find out how not increasing the load limit would hurt their business. He found out in short order that across the board that most island businesses would suffer if the load limit wasn’t increased, and fought hard to make it happen. It did happen in November, 2016 in a meeting where, after the vote was taken and the load limit increased, Hayes couldn’t help but to jump to his feet and shout, “Praise the Lord!”

He cared an awful lot about everything he was part of on this island. He didn’t just sit at a table and nod his head, he was incredibly active and spent countless hours trying to figure out the optimal decision to make in everything he was a part of.

David and Patty will be very missed when they leave the island this summer. Never once did I see Patty without a smile on her face, and quite often with a cake in her hand. She made it a point to bring something she had baked to every business on the island, and her baking prowess was greatly appreciated by many. She is a sweet, dear woman who perfectly matches David’s odd sense of humor and earnest ways.

It’s sad to see them go, but I believe they will be happy in their destination. In the meantime, if you see him around the island tell ol’ Rev. Hayes he did a heck of a job for this island at the bridge authority, and as a friend.