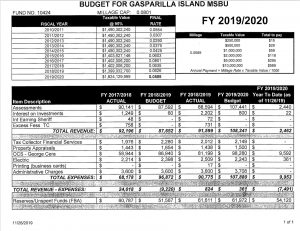 The Gasparilla Island MSBU iguana panel met last Monday, Dec. 2, to catch up on program information and talk about the budget.

Conversation started with the iguana trapper, George Cera, giving the board an update about how it was going with his leaving cards at residences where the homeowner had called for service but were not home when he arrived. Cera said he had used a few, and would continue to make sure the absentee homeowners were notified that he had, in fact, stopped by.

The board also talked about community education reference iguanas, and that many people weren’t aware of how to use their borrowed traps properly. They discussed disseminating that information through the newspaper.

If people use a live trap for their iguanas, strawberries and raspberries work well for bait. One board member said apple slices worked as well.  If an iguana does get caught in the trap, the homeowner can call Cera to remove it. He will also come if a non-targeted animal is in the trap that needs to be released.

Board member Kay Wagner said she realized the time management problem that Cera was up against, particularly because he has such a large area of the island to cover.

“What bugs people, what gets to them, is the fact that it’s the big ones people are seeing,” she said. “Some of the problem is that people catch these animals and think they have to put them in a pillow case, then double bag them. People can’t do that.”

Cera said he had no problem going over to remove the animals from the traps.

The two most important things to remember if a homeowner is tending a trap on their property are that the animals must be euthanized humanely (by Cera) and that the traps should be closed at night to avoid catching non-target animals as often as possible.

“If homeowners would get involved with the trapping process that would be great,” Cera said. “But one of the biggest problems is that people need to quit planting things that iguanas like to eat. I deal with this every day, a homeowner will tell me they’ve planted a particular kind of plant several times, only to have the iguanas eat. I say to them, stop planting those plants. If you create a smorgasbord for them, they will keep coming back. You’re creating an ideal habitat for them.”

The board also discussed having the county buy some traps, which could be checked out like a library book by residents. That way they wouldn’t have to buy their own traps (the traps are available at hardware stores for $30 to $50).

Wagner said it seems as

though there are more iguanas around in the past year or more than were there before, and other people had noticed it as well.

“I think everyone needs to look and define expectations,” he said.  “You need to look at this program like mosquito control. You know you’re going to have fewer mosquitos, you’re not going to get carried away, but you’ll always have mosquitoes. I think that one thing that happens here is that the cocktail party circuit repeats this around as a talking point … the expectation for complete eradication is wrong. The whole reason I am here is to protect our native species; I’m not a gardener for people. As long as we keep the numbers to where our native wildlife can thrive, I know I’m doing my job. To think you’ll never see an iguana again is a false assumption.”

The board decided they would pursue having the county purchase some traps from the MSBU fund, and they would determine at a later date how they would be distributed to people in the community. Instructions written by Cera for optimal trap use will also be disseminated.

If you are using a trap right now, Cera said the likelihood of capturing an iguana right now, in colder weather, is slim. The best days to use the traps are when it warms up, and there is no wind. For more information about how to keep your property iguana free, go to our website, bocabeacon.com, and look for this article.

Board member Joan Hall told Cera she thought he should be more visible during the workday, as she has heard that no one sees him around like they do the USDA iguana trapper in the Charlotte County portion of the island. Lee County MSBU Administrator Tim Gard said if the board wanted, they could place amber lights on George’s golf cart and have him wear bright orange to let people know who he was. Cera said he would be happy to do that, but he had stopped wearing his neon green iguana control shirts more often than not because people would stop him with questions or for photos, and that limited his time spent working. Board member Bob Vanyo said he had heard from people that when they saw Cera, he was “always standing around, talking to people.”

“He can’t win, no matter what he does,” Vanyo said.

The board discussed the competitive bidding process that will take place in 2020, for the January, 2021 iguana trapper contract renewal. Anyone interested in bidding for the job should check the leegov.com web site for instructions. You can also email tgard@leegov.com.

The job is paid by the hour now, but Cera used to be paid by the iguana. Gard said the reason they stopped paying per iguana was because of safety, and not have a trapper thinking of dollar signs, not safety.

Whoever gets the bid in 2021, Cera said the most important thing to remember – other than humane euthanasia – is safety. He can’t shoot at an iguana on a sea wall if there are boats in the water on the other side, and he can’t shoot in highly populated areas, particularly downtown. He also has to be very careful shooting into bushes or thick foliage, because he doesn’t know if someone is on the other side. Sometimes, he said, he hasn’t taken a shot and there was a landscaper or child on the other side.

“I’ve been out here almost 14 years doing this, my first and number one priority is safety. This isn’t trimming trees, this isn’t cutting grass,” Cera said. “There’s a lot of times I could shoot one, but if it’s right in front of someone complaining that their children saw me shoot it. Sometimes you just have to drive by, a lot of people just don’t get that. Every time I put that gun up to shoot it, my stomach does flips. I don’t ever want to deal with hurting someone. “

The board will soon be looking for another member. If you are interested, contact Tim Gard at tgard@leegov.com.

The board has tentatively set a next meeting date for March 30, 2020.

NOTE: There was some confusion over the date of this meeting, as a board member originally scheduled it for November 18. They put out a notice that read:

The Iguana Advisory Committee apologizes for the confusion surrounding notice of a meeting originally scheduled for November 18. The committee had scheduled the meeting with notification to the Boca Beacon and the County. The County Representative questioned the time and place of the meeting and, after much delay, now required that the meeting by published on a Lee County web site at a different time and place. It was too late to notify the Beacon that the County had canceled the meeting. 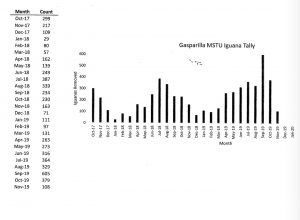 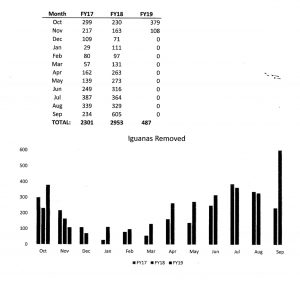 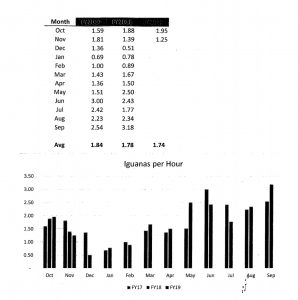 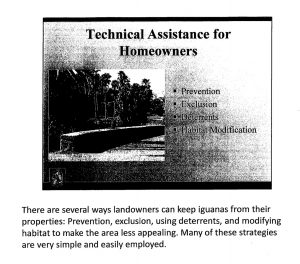 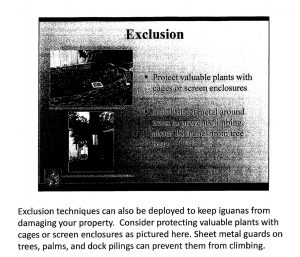 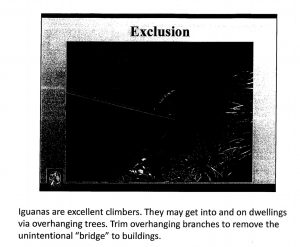 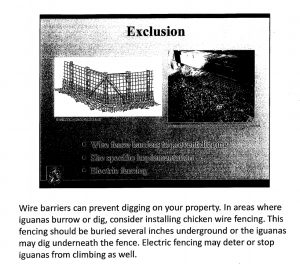 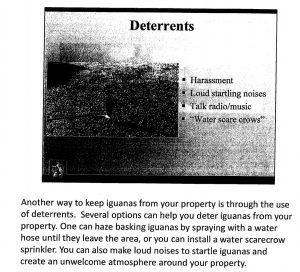 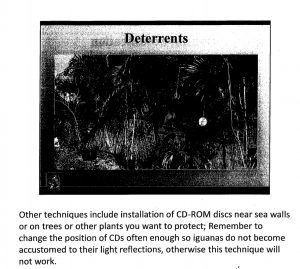 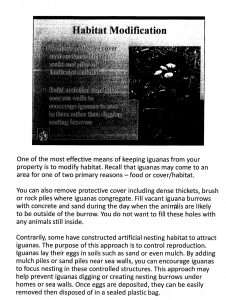 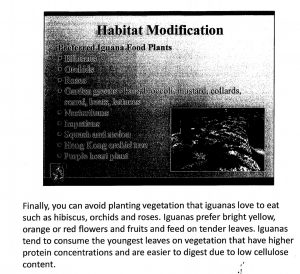 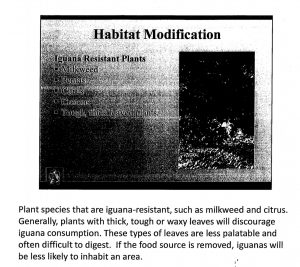