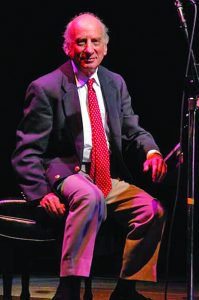 Join the Friends of Boca Grande today, Friday, March 24 for this exciting “Jazz Masters” performance at the Boca Grande Community Center. Two shows are scheduled, at 5 and 8 p.m.

While developing his own improvisational piano style, Hyman has also dabbled in ragtime and in renditions from the earliest periods of jazz. He has researched and recorded the piano music of Scott Joplin, Jelly Roll Morton, James P. Johnson, Zez Confrey, Eubie Blake and Fats Waller, which he often features in his shows. He has recorded more than 1,000 albums, including more than 100 under his own name.

“The Boca Grande show is very unusual, as it will feature Shelly and me as pianists, and Ken playing clarinet,” Hyman said.

Berg is currently a dean and a music professor at the Frost School of Music at the University of Miami, and Peplowski is a jazz clarinetist known for playing swing music and mainstream jazz.

Hyman has served as composer and pianist for several Woody Allen films. He lives in Venice and has been performing shows in the area and all around the nation for decades. He recently celebrated his 90th birthday.

Born and raised in New York City, Hyman grew up in the city’s booming jazz scene. After graduating from Columbia University, he began playing at popular clubs. He was a member of the staff orchestra for NBC for five years, playing for a variety of programs and for the early morning shows.

Hyman is planning to slow down his tours over the next couple of years, but said he won’t stop playing altogether.

“My wife told me it’s time to slow down, but I don’t think I’ll ever stop playing – it’s too big a part of my life,” Hyman said.

He’s done a number of concerts on the island in the past.

“I’ve performed many shows with Ken before as a duo at the Community Center. This show will largely include jazz standards, show tunes and a few original songs.”

Hyman recently performed at the Sarasota Jazz Festival and served as musical director at the event. In April, he’ll be heading to Washington D.C. for the National Endowment of Arts (NEA) Jazz Masters ceremony, where he will be one of five honorees. After that he’ll perform at the Julliard School of Music in New York City in May, where he will also receive an honorary doctorate degree.

General admission tickets are $35 and reserved-seating tickets are $60. Tickets may be purchased online at friendsofbocagrande.org or by calling the office at 964-0827.