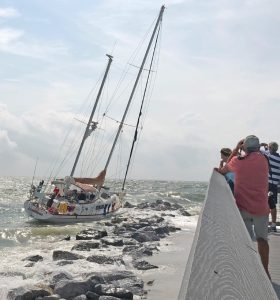 The Coast Guard had to take two men off this sailboat on the evening of Tuesday, Oct. 9 near Gasparilla Island, as eight-foot swells had the 50-foot sailboat in jeopardy. The unmanned vessel named “OldSkool” crashed into the jetty at the south end of the island by Port Boca Grande Lighthouse on Wednesday afternoon. No one was injured, but by Thursday morning the boat was essentially in pieces.
We didn’t get much rain from the hurricane on Wednesday as it passed by about 250 miles west of us in the Gulf, but Thursday brought some torrential rain – about three inches as of press time. High tides on Tuesday and Wednesday submerged island docks and flooded low-lying areas along the Bayou and the Gulf. It’s still too early to ascertain whether the weather chased any of our algae issues away.
Photo by Dusty