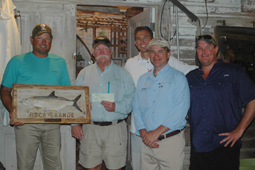 The tarpon were rolling in every direction as the sun was setting on the day of Friday, May 13 … and they seemed hungry. There were 17 teams participating in the annual Howl at the Moon Tarpon Tournament that night, and the tarpon proved to be hungry.

The rules for the tournament were designed to release the fish as quickly and healthy as possible, while showcasing the traditional methods that local fishing guides use in the Pass.

Anger Stu Lewis Sr. on the Blaze hooked a big one at 8:54 p.m. and released it at 9:09 p.m. after a heck of a battle. The fish jumped twice about 20 yards from the boat, then ran out 60 feet of line not once, but twice before it was brought to the boat.

“She’s running from something at this point – the sharks are probably after her,” said Capt. Waylon Mills.

Lewis gave up his chair to his son, Stuart, after winning that battle with a feisty tarpon.

“All right boys, I got us started. Now you all get to work,” he said to his team.

The action on the water continued as the sky grew dark.

Capt. Dave Chatham and his team on the Jill Marie had a fish on at 9:13 p.m., while Boca Blue was still fighting one. Boca Blue released two minutes later at 9:17 p.m., and Jill Marie released at 9:21 p.m.

Capt. Tater Spinks aboard the Anejo said he has only fished in a couple of Howl at the Moon events. He took second place in the Ladies Howl tournament a couple of years ago.

“The first hour was slow, but we got lucky and caught a few fish during the last hour. We did lose one at the end, but that’s all part of the game,” Spinks said. “We had a real good observer on the boat also – local girl, Ashley Coleman.”

Spook hooked one at 10:43 p.m., but Smitty announced that one went “Buh Bye” two minutes later.

Angler Robert Cox aboard the Blaze had the final catch of the night at 10:59 p.m. and released it at 11:01 p.m. But because they were already in first place, according to tournament rules they could not win third as well. That was why Capt. Willie Mills and his team took third, with their fish hooked at 10:58 p.m. and released at 10:59 p.m.

After losing two tarpon earlier in the evening, Cox’s spirits were low, but what an incredible way to finish the tournament and take his team to first place with four tarpon.

“I really wasn’t expecting that; it was quite a lucky surprise,” Cox said.

“That last hour was really exciting,” Willie said. “We had a total of five fish. The people on the boat have been coming here to go tarpon fishing for more than 20 years. We got lucky and hooked that last one for third place.”