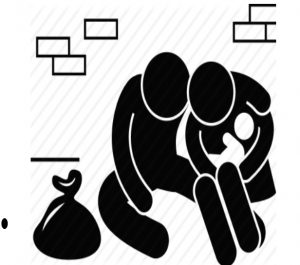 The following story is Part One of a series regarding the Charlotte and Lee County homeless population, how some of them became homeless, and what we can do to help.

The problem is not as cut-and-dried as many think. It isn’t always laziness that stops people from working, nor is it always mental illness, drugs or alcohol. It is much easier to become homeless than one might think, as you will find out from Jill-Anne Beary, an Englewood woman who courageously provided us with her story in this first article of the series.

During this Thanksgiving holiday break, be sure to be extra thankful if your circumstances have never found you without a home.

Homelessness. A word that often evokes images of joblessness, panhandling, alcoholism, drug use, mental illness, runaways and prostitutes. Many believe homelessness doesn’t exist in the areas where they live – like in Charlotte County. I’d like to think I always knew it was more than that, and I thought I raised my daughter to see it was more than that.

From the age of 9, she collected blankets, served meals at shelters, met children her age and even younger who were residents of the homeless shelter(s). She spoke publicly many times, trying to raise awareness of the “new face of homelessness,” and she quickly became well known in the area.

What I did not know was that the face of homelessness one day would be hers and mine.

In 2013 I was preparing to leave an abusive marriage. An unexpected twist rushed this process. After being falsely accused of domestic violence, I was arrested and not allowed back in the home under any circumstances. I refused to plead guilty, and it elongated the time it would take before she and I could return to the home to get more than a bag of personal belongings.

During the next five months my ex-husband emptied the home of all our belongings. Someone smashed in windows, and payments were not made on the home or utilities. We were able to find one friend who could give us a place to stay, and most importantly be together, but trying to find a place of our own was going to prove to be more difficult than I ever imagined.

Things I learned very quickly included the fact that having a violent arrest on your public record, regardless of never being found guilty, is highly frowned upon on rental applications. Working in the Department of Education is no longer an option – a drug conviction would have been easier to work with.

My daughter continued to go to school, and our personal situation was kept as quite as possible. I continued to go to court appointments, and I had what felt like were continuous interactions with our sheriff’s department, as our safety was continually being placed in question. Part of life when you leave a domestic violence situation is that the more control they lose, the harder they try to scare you.

It took some time, but I eventually saved up enough money for a rental application, first and last months’ rent and money to turn on the electricity. I found a landlord willing to overlook my arrest. In December, days before Christmas, I was given the lease and keys to our apartment.

It was like something out of “Miracle on 34th Street.” We were so overjoyed to once again have our own space, it didn’t matter that we had no furniture, silverware or cookware; we had a home we could call our own again.

We also knew the entire time that things could have been much worse, and that we were just a small part of the homeless population. Others find themselves in cheap motels, a tent, a car or separated on couches in various homes.

I look around at our home now, and I see that we have more than we need. It is peaceful, it is safe, it is ours. We have been in the same home and will be celebrating our seventh Christmas here. She is now in her second year at Stetson University and will be going on to graduate school right after her third year.

The year 2013 seems like a lifetime ago, but it was the year I learned how strong and resilient she and I are, and that the face of homelessness is just one unforeseen circumstance away, no matter how well prepared you think you are.