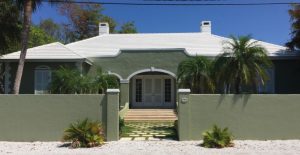 Several interesting projects will be discussed this month by the Boca Grande Historic Preservation Board, and they will hold two different meetings this month to make up for a cancelled meeting in September due to Hurricane Irma.

The first meeting will be held on Friday, Oct. 6 at 10 a.m. in the Woman’s Club Room of the Boca Grande Community Center. Several items are on the agenda, including a proposal to modify the property at 1050 E. Railroad Ave. to accommodate a four-bed assisted living facility. The proposal was submitted by Phanta Sea Assisted Living.

Two other proposals have been made by the McLaughlin family, owners of the store J. McLaughlin. They are asking the Board to consider the construction of a new, one-story, 1,500 sq. ft. retail structure at 354 Park Avenue, and remodeling and new construction at the noncontributing address of 470 Tarpon Avenue.

In March of 2015 representatives for the owner of 354 Park Ave. published a notice related to a proposed restaurant and parking lot. The parcel at the time was rumored to be slated for a 2,940 sq. ft., two-story restaurant with a parking lot proposed around the corner at 421 Palm Ave. The Palm Avenue property is not listed as being addressed at this upcoming meeting on October 6.

The owner of 354 Park Ave. is listed in the County’s database as 354 Park Avenue, LLC, The registered agent of the property is listed as Kevin McLaughlin of New York.

Other items on the agenda for October 6 include:

The agenda for the second meeting this month, scheduled for October 11, has not yet been announcd.