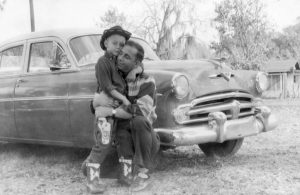 BY MARCY SHORTUSE – It was old home week at the last installment of History Bytes at the Johann Fust Community Library on Wednesday, Feb. 12, with Milton Bell as the speaker and John Johnson, Carolyn Bell, Robert Johnson, Mary Knight Vickers and Betsy Fugate Joiner in attendance as well.

Robert Johnson, whose family ran the pilot boats at Port Boca Grande for generations, was there as backup and moral support for Milton, who came to recall for the audience what it was like growing up on the south end of the island in the 1950s and 60s. 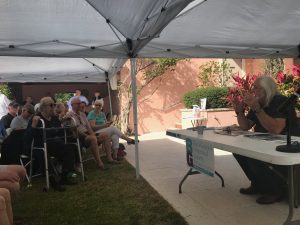 Milton (at the table) hashing things out with Robert Johnson (in the crowd).

Milton’s mother was born on Cayo Costa in 1913. She married and moved to Boca Grande, where she raised a large family.

Milton started out by describing a day in Port Boca Grande as a child.

“I woke up at around 6 a.m. and made my way down to the phosphate dock,” he recalled. “If there was a ship in at the time, it was a completely different set of circumstances. Then everything would be busy. But if there was no ship, it was a time of solitude and to go out on the dock and experience what it had to offer … and it had a lot to offer. 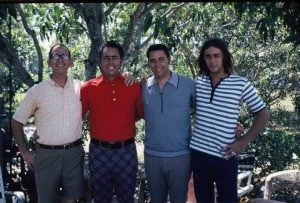 The Bell brothers. Milton is on the far right.

“I could go out even before sunrise and watch the dolphins feeding at the end of the dock, watch the leopard rays jump out of the water into the air and make their splashdowns. The pelicans would come across the Pass from a rookery. You could hear them fly overhead and their wings would sing. It was truly magical. When I would go on the shore, you could see these black skimmer birds that would come along the shoreline and just cruise, with their elongated lower jaws scooping up little minnows. It was the most impressive thing to me. There was something about being there and the solitude it provided. It would absolutely take you away.”

Milton also described one of his favorite things to witness when he was up before the sun – the green flash.

“My green flash always happened in the morning,” he said. “You knew it was going to happen, but then all of a sudden it would hit, and you would realize, that was it! It wasn’t something you could count down, it was just there and gone.”

Milton told the audience about how his father used to raise hogs and had a pen just behind where South Beach Bar & Grill is today.

“Right there at the west end of where the tracks were was a hog pen my father had,” he said. “He would slaughter hogs, and the first hog he ever slaughtered was one my mother had named Susie. If you know where Grouper Hole was, that was where he caught that hog – there used to be a dump there. He caught it, raised it, and made a really nice ham out of it. We had to throw that ham away, though, because my dad fed it fish scraps and it tasted like fish.”

Milton remembered the days when he would get off the school bus and hit the beach to look for sea grapes, so his mother could make jelly. He also tried to make sea grape wine, and it didn’t work well.

“A friend and I put it in a big old Mason jar and put it in his garage so it could age,” Milton said. “The kid’s mom thought she knew how to make this wine. So we left it there for about three days, then we tried to drink it.

“You know what a wet dog smells like? That’s what it tasted like. But old J.D. Johnson, a huge guy who lived at the south end and we used to call “The Giant,” drank it. He didn’t even bat an eye. He taught me how to eat raw potatoes.”

Milton recalled what it was like living right behind the old Power House, which is the large building across from the entrance to the Boca Bay Pass Club. It supplied all of the electricity for the island and port until the late 1940s, and in 1954 the old, giant diesel engines were taken out of the building when FPL connected the island to shore power. Prior to that, Milt’s father was the chief engineer there, and his brother was an assistant engineer.

Milt said he used to love riding the locomotives with the railroad employees, and they would teach him how to start and operate the machinery. One winter’s day Joe Freeman, the port agent, came to Milt’s house and was talking to his dad. Milt thought he was done for, that he had been caught for something.

“My father called me to come out to the back porch and I thought, ‘Oh no, this is it.’ My dad asked me, ‘Do you think you can start that locomotive?’ I said, ‘Yeah, why?’ He said, ‘Because they have to let it idle overnight, so it won’t freeze.’ I was in hog heaven. They followed me down to the locomotive and I started it up. I offered to stay out all night to make sure nothing came up, but they told me to go back on up to the house.

“I always thought it was funny that the only person who could start that locomotive in a 100-mile radius was an 11-year-old kid. But I was sure happy about it.”

Milton was a big fan of all the ships at port, and some of his favorites were the post-World War II Japanese ships which, according to him, were some of the finest ever made. He explained that all of their names ended with “Maru,” which was a phrase that meant the ship would always leave Japan and return safely.

Milton then asked an odd question of the audience.

“Anyone familiar with the Japanese mafia?” he asked. “The odd thing about them, they all cut off their little finger on their left hand. Mine is cut off as well, but it wasn’t because of the Japanese. There used to be two ferry boats that ran to Boca Grande before the bridge was built – the Katherine and the Saugerties. I used to stand up a lawnmower, the kind you would push and the blades would go ‘round, on one wheel and pretend I was steering that ferry. I steered the ferry all right, I cut my finger right off. They took me uptown to the doctor’s office, Dr. Coggins. He is the guy who crashed his plane on the golf course. He had a piece of wire he would heat up, and he would touch it to the fingernail on my other finger. I thought he was punishing me for cutting my finger off.”

Milton had fond memories of the Albatross Bar, which was enclosed in a three-section warehouse at the foot of the dock and was a notoriously rowdy place. “Sailors from England and Germany would go in there and fight,” he said. “There was also a small store in there, and the rest was warehouse. That warehouse was where I saw my first dead body, when I was 9. This man committed suicide by drinking liquid asphalt. I had to sneak in the warehouse to see him. I wondered, ‘What has happened in this guy’s life that has made him end it this way?’”

Another very popular tale was the story of the locomotive that went to sea.

“Down at the port, in order to turn a train around they had what was called a “Y” configuration,” Milton said. “The train would come down one way, stop, then back up and go out onto the dock and stop again. After a series of switches was turned, the train would head back north.

“On this one particular day, the engineer and the brakeman were a bit lax and didn’t activate the train brakes, just the engine brakes. I think it had been raining. The cars slid down and hit the derailer device, couldn’t stop, and they slid over the derailer. The locomotive then fell through the dock. It was like that for about five days. They had to get a barge and crane from New Orleans to get it out.”

Milt described the neighborhood at the south end, which was segregated. There was a school for the black children, and the Power House and cooling tower to keep the engines cool. His house would have been just behind that to the east, where the pond is now. He estimated there might have been about 100 people living at the port while he was growing up.

Back then, Belcher Road used to be called Johnson Street, because the old Quarantine House was there.

One of Milton’s most powerful memories, though, was listening to the whistle buoy in the ship channel.

“It activated naturally, by getting air compression due to water in the bottom of the buoy. That would make the whistle blow. I would lie in bed at night and hear that thing humming and moaning. To me, the entire world lay behind that whistle buoy. I kept telling myself someday … someday … I would go past it and see what’s out there ahead of me.”

Robert Johnson added commentary throughout the program, going back and forth with Milton about how things were and who people were, and ended it with a very interesting story of the old families of the island.

“I remember one History Bytes when Freddy Futch was talking to someone after the program had ended, about the old fishing ranch at the north end of the island,” Robert said. “He was telling this person about how his grandfather came here and helped to build the Port Boca Grande Lighthouse. I overheard what he was saying and decided to chime in. Now, keep in mind, the Futch and Johnson families haven’t been too compatible in the past. So I said to Freddy, ‘My grandfather saw you unloading lumber for the Lighthouse those many years ago.’ He said, ‘Yeah, and you Johnsons have been standing around watching other people work ever since.’ ”

The next History Bytes will be held on Wednesday, Feb. 19, at 11 a.m. in the loggia of the Fust Library, with Bobbi Marquis as the key speaker.

Newer PostYou’ve heard of ‘Coffee with a scientist,’ but what about with a captain?
Older PostAs we say ‘goodbye’ to Hilja Bilodeau, a new chapter is opened at the Boca Grande Clinic and Annex