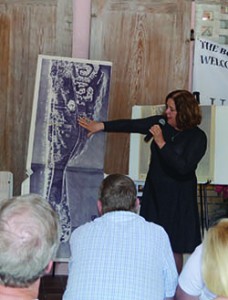 BY SUE ERWIN – Beverly Grady of the law firm of Roetzel and Andres in Fort Myers gave a presentation on Wednesday morning on “The Unique History Of Boca Bay – from Port to Beautiful Residential Neighborhood.”

From density issues to the digging of a marina, Grady discussed dealing with the governmental issues that led to today’s Boca Bay.

“Boca Grande Pass is the only large port between Manatee and Key West. There is a curious history about the property,” Grady said.

Grady said in the early 1970s an attorney in Fort Myers wanted to put in piers at the south end of the island to bring petroleum products to the area.

“It would have been ideal for southwest Florida to bring those products here,” she said.

Lee County did a feasibility study to determine if the idea should be considered, but it didn’t come to fruition, according to Grady, and the phosphate port operation was lost in the 1970s.

Grady represented Lee County in the abandonment of the port.

“Many citizens supported the fact that it should stay here, as it was part of a historical operation,” Grady said.

In 1980, the state legislature ruled there could be no rezoning on the island with the exception of CSX.

Lee County amended its ruling for a special exception for residential uses.

In June 1984, the board rezoned the land for residential uses on the south end of the island, and that gave the approval for Boca Bay to be developed.

Grady said that from 1984 through 1987, detailed plans were created for a final approval.

“January 12, 1987 was a key day for this island, when the final plans were approved for the south village,” she said.

They started with the North Bay.

“It wasn’t always smooth sailing. There were different hurdles that had to be jumped to create beautiful Boca Bay,” Grady said.

The next step was to design wet slips for boats, and that was another special exception that needed to go through an approval process.

A hearing was held in 1991, and the board of commissioners approved the building of 85 wet slips.

Grady ended the discussion by saying she believes the beautiful residential community is unique, especially considering the history of its making.

The event was the last “History Bytes” lecture of the season.

The Boca Grande Historical Society is always in need of more volunteers. For more information, call 964-1600.