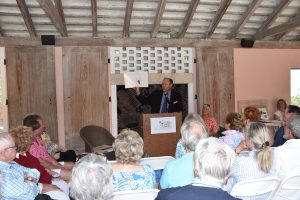 Sixth-generation Floridian Hank Hendry spoke to a crowd at the final History Bytes event of the season on Wednesday, March 27.

His great-great-grandfather Francis Asbury Hendry first visited Fort Myers in 1853 as a scout for the Army during the Third Seminole Indian War.

“Many people have no idea that Fort Myers was named that because it really was a fort at one time,” Hank said. “That small engagement in 1865 is known as the southernmost land battle of the Civil War. And it was a plum assignment for the troops – the weather was nice and the fishing and hunting was good.”

Built on the banks of the Caloosahatchee River, Fort Myers was chosen twice by the United States Army for a military fort. Even before the Army had come, Seminole Indians had chosen the spot for their villages.

“Florida very quickly became a refuge for Indians who did not like dealing with the colonial settlers in the northern colonies,” Hank said. “Florida also rapidly became a haven for runaway slaves – as long as Florida was under Spanish rule they were safe.”

Hank said when Fort Myers was built in 1850, there were more cattle than people in the state.

His great-great-grandfather first started out as a scout for the Army in the Third Seminole Indian War before he enlisted. He was paid a dollar a day in gold which was a fairly good wage at that time.

“He helped drive cows to northern Georgia to feed the confederate troops,” Hank said. “The entire south confederacy was so short of beef that a black market developed. The government had to patrol the Florida/Georgia line to stop the cattle smuggling.”

Hank shared details about the history of Fort Myers, sharing that in 1763, France, Britain, and Spain signed the Treaty of Paris at the end of the French and Indian War. As part of the treaty, France gave up almost all of its land in North America and Spain gave up Florida. During the French and Indian War, Britain had captured Havana, Spain’s busiest port. In exchange for Havana, the Spanish traded Florida to Britain.

The British did not rule Florida for long. The colonies north of Florida were tired of Britain’s rule and decided to fight for their independence. They began a war known as the American Revolution. During this time, colonists who fought for independence were known as Patriots. Those who sided with Britain were called Loyalists.

Britain had lost control of the thirteen colonies, and therefore, had little interest in keeping Florida. Florida was still isolated from the original colonies and did not produce big profits for Britain. In, 1783, another Treaty of Paris was signed ending the American Revolution. It was at this time that Britain recognized the independence of the United States. Although Spain regained Florida, its rule was short lived. In 1821, the United States was successful in purchasing Florida from Spain, and it became a territory of the United States.

Hank is a second-generation attorney and a graduate of the University of Florida College of Law. He is a member of the Mayflower Society, Sons of the American Revolution, Sons of the Union Veterans of the Civil War, the Seminole Wars Foundation and former director of the Southwest Florida Historical Society. He is currently president of the Lee Trust for Historic Preservation.

The program was sponsored by U.S. Trust, and hosted by the Boca Grande Historical Society. The organization is always looking for new members of volunteers.