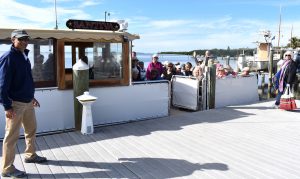 It was a very chilly morning for a boat ride, but 49 people stepped aboard the Santiva on the morning of November 29, to embark on a trip along the Calusa Blueway,

The Boca Grande Historical Society hosts a group excursion each year to explore different historical landmarks in the area.

The Santiva, operated by Captiva Cruises, headed across the harbor to Pine Island, where the Calusa Indians once constructed a cross-island canal. The Charlotte Harbor waterway was used by native people in the early 1500s.

Educational Tour Director Richard Finkel said, “The Calusa Tribe lived along the coast and built their homes on stilts. They wove palmetto leaves to fashion roofs.

“They did not farm. Instead they fished for food using nets. They did live off the land for fruits and vegetables, but most of their protein consumption came from fish and local animals.”

The Calusa are considered to be the first shell collectors. They used shells for tools, utensils, jewelry and as ornaments for their shrines. Shell spears were made for fishing and hunting. Shell mounds can still be found today in this area, and several exist on Pine Island.

Finkel was a friendly tour guide for the group, and he pointed out several historical facts as well as dolphins and various other wildlife during the trip.

After arriving at the island, the group enjoyed lunch at the Tarpon Lodge, which has its own interesting history. It was built in 1926 as a fishing lodge by Graham and Mary Wilson and later was enlarged to an 18-room house with electric lights powered by a generator. In 1945 it became the Pine-Aire Lodge catering to sports fishermen. Among the cottage owners was John L. Lewis, the powerful labor leader.

Then the Pine-Aire became a retreat and school operated by the American Bible College and renamed “Pala Mar,” meaning “Wondrous Works by the Sea.” Even later, it became The Cloisters, an alcohol and drug treatment center. Finally, in 2000, it was purchased by the Robert Wells family and was named the Tarpon Lodge.

After lunch the history of the Calusa tour continued at the Randell Research Center of the Florida Museum of Natural History. The Center includes a massive shell mound site. “This and a dwindling number of shell mounds between Charlotte Harbor and the Ten Thousand Islands region in the Everglades are all that is left of the Calusa,” said Cindy Bear, programs and services coordinator for the Randell Research Center.

The area where the Calusa lived is referred to as Pineland. Interpretive signs along the trail can be found to educate visitors about the tools the Calusa used during their years on the island. People first started living at Pineland about 2,000 years ago and occupied the place almost continuously for 1,700 years. To put this in perspective, our own country is only 242 years old; the Calusa lived at Pineland for seven times that number.

The tribe withstood serious challenges, including a devastating hurricane that destroyed their village about 300 A.D. They adapted to climate changes, lowered water levels and other economic challenges – but they persevered.

Charlotte Harbor has a history that extends back thousands of years, evidencing the lives of people who lived here long before the arrival of European explorers. Among the most successful of these prehistoric societies was the Calusa, who numbered around 50,000 people in South Florida.

Guided tours are offered by volunteers at the Randell Research Center, but visitors are also encouraged to explore the trail on their own. The trail meanders nearly a mile through the mounds, canals and other features of the Pineland archeological site. An observation platform exists atop the site’s tallest shell mound. The visitor center includes restrooms and picnic tables. There is also a gift shop that features books by local authors on archeological topics.