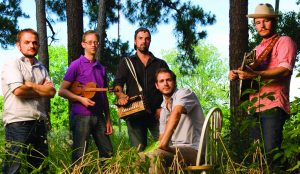 Put on your dancing shoes and begin practicing the two-step. The Grammy-nominated Pine Leaf Boys band is coming back to Boca Grande, headlining the Boca Grande Historical Society’s 2018 fund-raiser on Sunday, Feb. 18.

“Since their last appearance here we have had many requests to bring back this much-loved band,” says Historical Society President Karen Grace. “Their spirited Cajun and Creole music makes you want to dance. And their sound is reminiscent of the music that was played at informal community gatherings in the island’s past. It’s going to be a fun evening.”

An Italian dinner with spaghetti, salad and dessert, will be available at the Crowninshield Community House starting at 6 p.m. The band’s performance will begin at 7:30 p.m. in a tent adjoining the Community House. Alcohol beverages can be purchased at a cash bar. Soft drinks and water will be provided at no charge.

Tickets for the band performance and dinner are $85 per person. They are available at bocagrandehistoricalsociety.com, at the Society’s office at 170 Park Avenue or by calling 964-1600. Proceeds will benefit the Historical Society and the Crowninshield Community House.

The band is known for playing traditional Cajun and Creole music from Southwest Louisiana, inspired by bands dating from the 1920s. They are an international band, having performed many shows in Europe, including in a U.S. State Department Tour in 2009 to the Middle East and in 2010 to Latvia, Denmark and Slovenia.

The Pine Leaf Boys have been nominated for four Grammy Awards including for best Zydeco or Cajun Music Album for their second album Blues de Musicien as well as for their albums Homage Au Passé and Live at Jazz Festival.