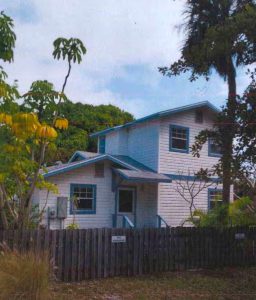 The Boca Grande Historic Preservation Board held its monthly meeting on Wednesday, Sept. 12, and there was plenty of debate about a request to demolish an existing single-family residence and to construct a new one at 235 Banyan Street.

The current property is a two-story residence that was built in the early 1980s. The structure is approximately 900 square feet in area.

The proposed 2,800-square foot residence would be oriented toward the southeast corner of the property at West Railroad and Banyan Street. It would be a two-story home and feature a wrap-around porch and a detached garage that would have access to the alley.

Lee County Planner Anthony Rodriguez said staff reviewed the certificate of appropriateness submission package and finds the project to be substantially consistent with the design guidelines for the Boca Grande Historic District and Chapter 22 of the Land Development Code.

“Staff recommends that the Boca Grande Historic Preservation Board approve the special certificate of appropriateness to permit the demolition of the existing residence and to permit the construction of a new single-family residence as depicted on the site plan.”

Rodriguez added that the size of the lot is not conducive to comply with the setbacks, so the applicant is required to file a request for an administrative zoning relief.

Board member Susan Hanafee said it doesn’t seem possible to build a structure of this size on the property.

Justin Sexton of Old Florida Homes said that although the current structure could be remodeled, it’s in dire need of foundation repair.

Hanafee asked what percentage of the lot the house would cover.

Rodriguez said he didn’t have exact calculations, but said it did exceed the 40 percent lot coverage.

Board member Bill Caldwell was in favor of the proposal.

The four Board members in attendance appeared to be split in their decision.

Rodriguez reminded them that a tie is a denial.

“I advised Mr. Sexton that he can request a continuance so more Board members could listen to the recording of the meeting and then vote on the matter next month,” Rodriguez said. “Or he could alter the plans and try to address some of the concerns of the Board.”

Sexton requested a continuance to the next meeting.

A motion was made to continue the matter to next the meeting, and it passed.

The next item on the agenda was a request to complete interior and exterior alterations to an existing residence at 400 4th Street West in Boca Grande.

The plans are to replace windows and doors and alter the rear facade and yard area of the home.

Designer Diane Weinman represented the applicant and said careful thought was taken to restore and preserve significant materials and features of the existing house.

“We will be maintaining the original structure of the 1930s house, and these renovations will not disrupt the historical integrity of the home,” Weinman said.

Board member Bill Caldwell said he thought the presented plans were an improvement to the property and made a motion to pass. It passed, three to one.

The next item on the agenda was a request to install a new pool into an existing paver deck at 1600 East Railroad Ave.

Planner Rodriguez said staff reviewed the certificate of appropriateness application package and finds the project to be substantially consistent with the design guidelines for the Boca Grande Historic District and the Land Development Guidelines, Chapter 22.

“We recommend the Board approve the request for the subject property pursuant to Chapter 22 of the LDC as provided in the site plan specifications,” Rodriguez said.

A motion was made to approve the request, and it passed.

The final item on the agenda was a request to rehabilitate a single-family residence to address changes to the stairs, windows and doors that were approved by Special Certificate of Appropriateness COA2015-00112 and proposed additional changes not considered previously by the Board. This includes demolition of two chimneys, replacement of existing main entrance sidelights, deletion of two previously approved outdoor access stairs, alteration of new main entrance stairs to include a landing, deletion of previously approved double garage doors in favor of a single large door, replacement of stucco siding on east facade with horizontal siding, and the deletion of previously approved multi-light French doors with single-light French doors. The applicant also proposed to install a new pool to replace the previously demolished pool.

Sexton, who spoke on behalf of the applicant, said the chimneys are being kept for visible appearance and are inoperable.

Rodriguez said staff recommends the Board approve the proposal, but denies the request to rebuild the chimneys.

A motion was made to accept the proposal and to deny rebuilding the chimneys. It passed.

The next meeting will be held on Wednesday, October 10 at the Boca Grande Community Center Woman’s Club Room.