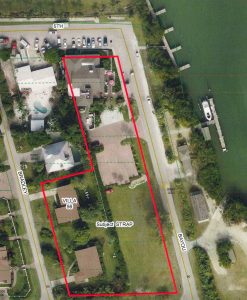 The Boca Grande Historic Preservation Board approved four requests for renovations at its monthly meeting held on Wednesday, June 13 at the Boca Grande Community Center.

The first request was a proposed remodel of the existing sunroom, screen porch expansion and re-roofing at 1971 19th Street in Boca Grande.

The applicant proposes to re-roof the entire residence, remodel the sunroom, enlarge the adjoining porch and remove a portion of the existing six-foot-high wood fence adjacent to 19th Street East and replace it with a six-foot high concrete wall.

Lee County Senior Planner Jessica Leatherman said staff recommends that the Board make a finding that the proposed project is in compliance with the design guidelines for the Boca Grande historic District and Land Development Code Chapter 22, and approve the special certificate of appropriateness for the subject property.

Chair Paul Eddy said he knows the property well and thinks the improvements would make a nice addition.

A motion was made by Bill Caldwell to approve the project, and it passed.

Lee County Planner Peter Blackwell said the next two items on the agenda were very similar, both related to converting properties into villas for The Gasparilla Inn.

The second request was a proposal to renovate an existing single-family residence at 420 Bradley Avenue to convert it into a villa for The Gasparilla Inn.

The request was to replace windows, convert a carport to a garage, enclose a lanai and paver deck, and install new exterior doors and new siding at Villa 56 to conform to Gasparilla Inn.

Blackwell said the proposed construction conforms to both the Secretary of the Design Guidelines for the Boca Grande Historic District and Chapter 22 of the Land Development Code, and recommended that the Board approve the project. A motion was made to approve the request by Sue Hanafee, and it passed.

The third item on the agenda called for the replacement of windows and doors, new siding and a new screened lanai at 420 Bradley Avenue, also known as Gasparilla Inn Villa 57. That request was approved.

The final item on the agenda was a  request to complete alterations to 1190 11th Street East. Proposed additions included a minor interior remodel of the existing contributing residence, to include a 52-sq. ft. entry and a two- story, 970-sq.ft. garage. Interior remodel would be limited to the removal of two closets to provide a power room.

Lee County Zoning Principal Planner Anthony Rodriguez said staff has reviewed the request and finds it conforms to both the Secretary of the Design Guidelines for the Boca Grande Historic District and Chapter 22 of the Land Development Code, and recommended that the Board approve the project.

The next meeting is planned to take place at 10 a.m. on Wednesday, July 18.

For an audio recording of the meeting, visit leegov.com.