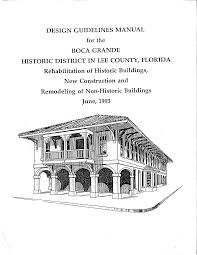 What started out as a relatively mundane Boca Grande Historic Preservation Board meeting started exhibiting some interesting twists and turns about halfway through.

With just three items on the agenda and the first one continued until the April meeting, the second item up for approval was a project at 235 Whiskey Row – the Mazza residence – which includes construction of a second-story addition on the southwest corner of the home, to demolish an existing carport that is in the middle of the end of the road at this time and erect a garage on the property in its place.

Lee County Planner Peter Blackwell said the county had examined the proposal and found that it met with county criteria, and acceptance of the plan was encouraged.

When board member Dana Robinette asked if a utility pole on the property would be moved or taken out entirely, Contractor Justin Sexton from Old Florida Homes approached the microphone and explained to the board that the whole neighborhood on Whiskey Row wants to eventually take their electrical lines underground, and the Mazzas had been in communication with FPL to get that done at their house. Board member Becky Paterson engaged Sexton in discussion regarding the proposal to change out some windows on the upper level of the north side of the house to the west side, including some French doors and a bank of sliding glass doors. Paterson wondered if they could all be changed to French doors, because in her opinion glass sliding doors detracted from the historic nature of the home.

Board member Billy Caldwell explained that one of the primary rules in drawing up plans for a house is that “form follows function,” and that the glass sliding doors were safer – rated for 170-180 mph hurricane-force winds – whereas French doors are not.

“It’s got rot all through it,” Caldwell replied. “That might have something to do with the water coming in.”

As long as sliding glass doors appear to be the look of a French door, it should be all right. Board member Paul Eddy asked for brochures at the next meeting.

Sexton said those types of doors were incredibly expensive and non-returnable, and that he couldn’t just agree to order them without consulting the homeowners.

“They bought a house on the Gulf, they can afford the doors,” she responded.

It was during this discussion when things got interesting. Apparently this house that was originally built in 1926 was not listed as a “contributing” structure in the Historic District. The board was stunned, to say the least.

“We need to get this on the contributing list of homes,” Paterson said. “It meets all of the criteria, it is wrong that it is designated as non-contributing, for all kinds of reasons including insurance and things moving forward.”

She was told that was a separate issue, and would be addressed at the end of the meeting in separate business.

In the end the board approved only part of the Mazza project, and the rest will be continued at the next meeting. It was later determined the board and county would pursue changing the homes’ status from non-contributing to contributing.

After the third and last official item on the board’s agenda – approving a rear awning on the Gulf-to-Bay Sotheby’s office on Park Avenue – the meeting turned to items that were presented by board members. Board member Susan Hanafee said she had been approached by many people about a construction project at a home at 11th Street and E. Railroad Avenue, specifically 1050 E. Railroad Ave (owned by “Seas the Day BG LLC out of Sarasota). She said there was no building box on the property that she could see, and the interior of the home appeared to be gutted.

This residence has come before the board before. In October of 2017 a proposal to renovate the residence to an assisted living facility was put before the board. A Venice company representative called Phanta Sea Assisted Living said their thought was to convert the building into a four-bedroom ALF, as the family who owned the home had a family member who needed care. At that meeting Lee County said in their determination the proposal did not violate the zoning codes, as that property is zoned RM2 (Residential Multiple Family). They also said that Lee County code defined an ALF as a residential land use, and that is allowed in a residential district.

However, the question then was that the county superseded the Gasparilla Island District Act and its dwelling unit definition.

At that meeting the Historic Preservation Board denied the proposal, and it has not come before the board since then. However, at the February meeting Board Chairman Guerrino Savio did bring up that he had heard rumors the project might be making a comeback.

Anthony Rodriguez, planner for Lee County, said he had pulled the project up and found it to include raising the slab the house is sitting on, and making the single-family residence’s bathrooms, bedroom and kitchen ADA complaint. Other changes included in the plans were to shutters, a sprinkler system and the security system.

He told the board he would bring the plans for the project to the meeting next month.

One member of the audience, Nina Coin, attempted to address the situation. When she was told the public comment portion of the meeting was closed, Savio made a motion to re-open it. The board unanimously agreed to do so, and Coin told the board that this project was approved under the auspices of just one handicapped person living there. Paterson corrected her, and said it was approved as a single-family residence, not that only one person could live there. When she asked if it could be turned into a commercial business, she was told it could not.

Peter Solmssen, a resident of 11th Street, addressed Lee County officials and the board and asked if the information regarding commercial businesses not being allowed to operate at that location was true. Rodriguez said it was, that it does not permit commercial uses.

Paterson then explained that the problem was with the fact that assisted living facilities are allowed to operate in single-family residences … even if it is operating as a for-profit.

Solmssen’s second question was whether or not the statute was self-executing.

“Can an applicant or building determine whether the statue doesn’t apply, as it doesn’t change the exterior?” Solmssen asked. “That would avoid the jurisdiction of this board. It strikes me as unlikely … without having read it … that it is self-executing, whether the applicant can decide whether or not they need to apply.

“I suggest you secure legal advice.”

The next scheduled meeting of the board is on Wednesday, April 10 at 10 a.m.