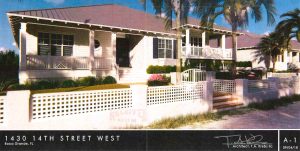 The Boca Grande Historic Preservation Board approved four items at their monthly meeting on Wednesday, December 12, aside from approving the redevelopment of The Gasparilla Inn Beach Cottages and amenities.

One of the proposals was a request to construct a detached garage at the rear and side of the Robinette residence located at 1120 11th Street. The property is a single-family residence that was originally constructed in 1942 and is described as a 4,237-square foot, three bedroom, three-and-a-half-bath structure. The proposed garage will have space for one regular automobile and one golf cart, each with its own door. The garage will be attached to the main structure.

A motion was made to approve the request as presented by Lee County staff. It passed unanimously.

The next two items on the agenda were requests to construct two new single-family residences at 1420 14th Street West and 1430 14th Street West. The subject properties are non-contributing and located in the Boca Grande Historic District.

1420 14th Street is located at the south side of 14th Street West to the west of Gasparilla Road. The property is the product of a re-plat portion of the revised plat of Boca Grande. The property to the east (1430 14th Street West) is presently undeveloped and was also a part of the aforementioned re-plat. A new single-family residence is proposed to be constructed on the parcel to the east. The two properties do not exhibit any permitting history. The applicant is requesting approval to construct a new single-family residence, swimming pool and other site improvements on subject property. The vehicular access to the property will be provided from this roadway via a proposed driveway along the west side of the residence. A combination swimming pool and spa and associated pool deck is proposed at the rear of the residence. A side-load garage will be located below a portion of the living area at the northwesterly corner of the residence.

“Staff finds that the materials and architectural design are compatible with both the character of the historic district and the Boca Grande community in general,” Blackwell said. “And we recommend that the Board approve the proposal.”

Architect Tim Kreb said the owner has asked him to design both of the new residences to match the typical look of the island.

The final item on the agenda was a request to install a dock and boat lift and allow for installation of a new rip rap shoreline at 150 1st Street. The subject property consists of a single platted lot on the south side of First Street East. The parcel is currently undeveloped apart from a boat dock running along the shoreline of the canal in the southern portion of the lot. The property is also partially vegetated with shrubs and mangroves. The property is a noncontributing site located at 150 1 Street East. The lot is on the south side of the street. Abutting on the east and west sides of the property are existing single-family residences. The new dock would run exactly parallel to the shoreline of the property and would extend across the entire length of the shoreline frontage (approximately 80 feet). The proposed dock itself will not extend as far into the canal as the existing dock, although the proposed boat lift will extend 14 feet farther into the canal than the proposed dock.

Blackwell said Lee County staff finds that because the proposed dock is more similar to surrounding shoreline docks than the existing structure, the proposed dock will bring the subject property into closer conformance with the character of the historic district and the community in general. He recommended that the Board approve the request.

A motion was made to approve the request, and it passed unanimously.