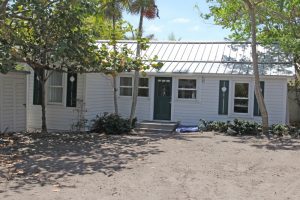 A local television news station reported recently that Lee County is looking to move a 1920s cottage once owned by Katharine Hepburn to Fort Myers Beach.

The report stated, “The Boca Grande Historical Society next month will discuss allowing the County to relocate the cottage. The plan is for its new home to be in the Matanzas Pass Preserve. County commissioners must also approve the move before the cottage makes the 2-hour journey south.”

Lee County has discussed this relocation with stakeholders, including the Town of Fort Myers Beach Local Planning Agency, Town staff and the nonprofit Friends of Matanzas Pass Preserve.

The Board of County Commissioners will consider an agenda item at a future meeting to accept the cottage as a donation. The donation is to include the cottage itself and relocation costs. If approved, the date of the relocation will be determined. The cottage was built in 1925.

“At one point, the property on which the cottage is located was owned by actress Katharine Hepburn. Ms. Hepburn did not stay in the cottage; the cottage was located on her property,” Clayton said.

Newer PostBeacon team up for nine awards in FPA annual contest
Older PostBaby ducks stranded — Safety Harbor to the rescue … or not?