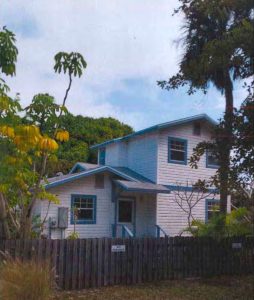 The Boca Grande Historic Preservation Board held its monthly meeting on Wednesday, Nov. 14, and the debate continued about a proposal regarding a property at 235 Banyan Street.

The request, an item continued from the September 12 meeting and then again continued at the October 10 meeting, was to demolish an existing single-family residence and construct a new one at 235 Banyan Street in the historic district of Boca Grande.

Currently, the property is a two-story residence that was built in the early 1980s. The structure is approximately 900 square feet. The proposed 2,800- square foot residence would be oriented toward the southeast corner of the property at West Railroad and Banyan Street. It would be a two-story home and feature a wrap-around porch and a detached garage that would have access to the alley.

Lee County Planner Anthony Rodriguez provided a memo to the Board summarizing the changes that were made to the proposal.

“The Board expressed some concerns relative to the size of the proposed residence, and the applicant prepared a revised plan to attempt to address those concerns,” Rodriguez said.

Michael Haymans, attorney for the applicant, said the request is not out of character for the block, and the new home will be a structure similar to the neighboring homes.

“We believe that we match the setbacks from the existing properties, and it matches the scale of the homes,” he said.

Board members again debated back and forth about easement issues and the quality of the existing property on the residence. After much discussion, both for and against the proposal, the Board rejected the request, four votes to two.

“The proposed building will be larger than the existing structure; however, this will actually bring it closer to compliance with the appearance of the neighboring structures,” Blackwell said. A motion was made to approve the request, and it passed unanimously.

The third item on the agenda was a request to install a new exterior wall sign at the new Fresh Produce store located at 433 Fourth Street. The non-illuminated proposed sign will be 1.7 feet high and seven-and-a-half feet long. Individual lettering will be constructed with painted wood and will be mounted between two existing bay windows on the ground floor of the building.

The next item on the agenda was a request to permit a change in roof- cladding material for the existing residence from clay barrel tile to standing seam metal. The subject property is listed as noncontributing in the Boca Grande Historic District. Therefore, any alterations to the property are required to be consistent with the design guidelines for the Boca Grande Historic District and Chapter 22 of the Land Development Code.

The final item on the agenda was a request to remove sections of existing shadowbox-style wood fencing along the easterly and southerly property lines and to construct a new six-foot-high masonry block wall along these portions of the property located at 860 Palm Ave.

It passed with the condition that the applicant would consider synthetic material for the new fence instead of wood or vinyl.