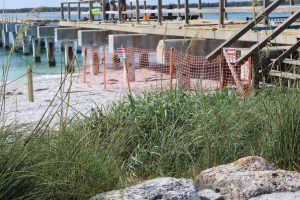 BY OLIVIA CAMERON – A walk on the beach along on the shore of Charlotte Harbor, at the south end of the island by Hill Tide Estates, has been temporarily restricted by an orange barrier and bustling construction. The private pier that runs along the water is currently under construction.

The Seagate Development Group is reconstructing the pier (once an old oil dock) just above the barrier. The observation pier will provide a view of the waters at the mouth of the Charlotte Harbor, but only for the residents of Hill Tide Estates.

Developer superintendent Gary Arrowood explained the pier is undergoing an update that will expand its reach and give the private location viewing access.

“In the last few weeks, we started preparation to re-deck the pier surface,” said Gary.

The development group has planned to elongate the pier to provide a scenic viewing area.

“The safety net that blocks the beach path is a safety precaution so people aren’t wandering onto a construction site,” said Gary.

The private pier will be an accessible attribute of Hill Tide Estates within the next two to three months. The beach path under the pier will be blocked until further notice.

In November of 2015 an initial presentation was given by for Hill Tide Estates, by the Seagate Development Group, LLC and BCB Homes, Inc., Boca Pass Partners LLC, the two companies who created the project, along with Waldrop Engineering. The original discussion regarding plans for the property included a long dock that would be built on the northeast corner of the property out into Charlotte Harbor.

Attorney Chuck Basinait from Henderson, Franklin, Starnes & Holt spoke on behalf of the developers, and when asked if the old oil dock that is still in the water there would be allowed to remain, Basinait said they had discussed leaving it there.

“We may remove it entirely or leave a portion of it,” he said in the 2015 meeting. “We may keep some of it for purposes of historical significance, and because it’s a nice feature to have.”

Another question raised at the meeting five years ago was whether beach access would be restricted there if the proposed development is built. One resident said he lives just north of the proposed site, and he knows that people walk the beach frequently.

“We haven’t vetted that yet,” Basinait said. “It’s one of those questions I would love to be able to answer. I don’t know why we would want to cut off access. We will try to work it out. We don’t want to take it away from anyone.”

We will keep checking on the status of this project, and will keep you updated with new developments.