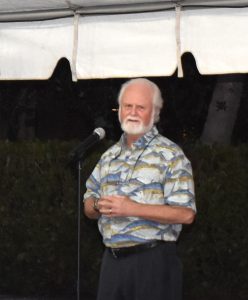 The fact that Southwest Florida is currently experiencing devastating impacts from harmful algal blooms (HABs) is well understood by all of us who call this region home. What is not as well understood by many is that we are experiencing two simultaneous but separate types of blooms, both with their own harmful impacts on our environment, quality of life and economy.

The ongoing blue-green algal bloom occurs primarily in freshwaters and can be directly linked to federally directed outflows from Lake Okeechobee, down the Caloosahachtee River into Charlotte Harbor. Blue-green algal blooms have significant negative impacts themselves in the areas where they occur, regardless of whether a red tide event is occurring in nearby coastal ocean waters. The Florida Department of Environmental Protection (DEP) serves as the state government lead for dealing with blue-green algal blooms, while the Florida Fish and Wildlife Conservation Commission (FWC) serves as lead for dealing with red tide blooms. The ongoing red tide bloom is a naturally occurring, cyclic event that is not initiated by outflows from Lake Okeechobee, nor inputs from the Caloosahachtee River. Red tide (caused by Karenia brevis algae) begins far offshore, deep in the Gulf of Mexico. As often happens when the winds and currents move together toward the coast, our local coastal communities, beaches and embayments experience the harmful impacts these blooms can have. These are independent, objective science-based facts, not emotional or political talking points.

Both types of algal blooms must have nutrients to survive and grow. The nutrients both algal blooms utilize come from both naturally occurring sources and from human activities. However, the specific types and combinations of diverse nutrient complexes that each algal species utilizes are different. It is reasonable to hypothesize that the ongoing freshwater blue-green algal bloom is utilizing many of the nutrients coming from Lake Okeechobee and the Caloosahatchee River before they get out to the marine waters.

Excess nutrients are bad for these freshwater systems, as well as the Charlotte Harbor estuary, no matter how they affect red tides in the ocean, and they should be reduced – whether their source is from lake outflows, stormwater runoff from land or through other means.

The red tide bloom is being fueled by a complex mixture of nutrients in marine waters from offshore to the coast, and many of these are from diverse coastal sources, including non-point-source runoff and inputs from numerous creeks and rivers in the region that carry terrestrial nutrient runoff from rainfall. Though freshwater blue-green algae blooms are generally not expected to thrive in the saltwater environments suitable for red tide, more research is needed on the transport and decay of freshwater blue-green algae out into coastal saltwater, including whether they can provide nutrients or otherwise influence red tide blooms that have reached the coast. In general, much more research is needed to explore the potential linkages among freshwater algal blooms, nuisance algal blooms that can form in the estuary, and ocean-dwelling red tide that forms offshore.

The bottom line is that red tide is indeed a naturally occurring phenomenon that existed long before Europeans came to Florida, and the type of intense bloom we are experiencing now is not “normal” but is also not unprecedented. It is also clear that excess land-based nutrients flowing into Florida estuaries and coastal waters in stormwater runoff, rivers and creeks exacerbate the growth of HABs, and that durations of red tide events are correlated with the combination of all riverine flows, not a single river such as the Caloosahatchee River.

Years of cutting-edge research have significantly increased our understanding of HAB dynamics. Mote Marine Laboratory, a unique Florida-grown and completely independent, nonprofit, global marine research enterprise, has laid out a vision for much more that needs to be done through the creation of an independent Florida-based Marine and Freshwater HAB Center that will utilize innovative approaches and technologies to strategically address: rapid assessment and modeling for HAB forecasting; HAB prevention, control and mitigation of impacts; public health protection; and expansion of local community outreach and engagement (access Mote’s red tide resources at mote.org/redtidefaq).

Clearly, immediate actions are needed to respond to these algal blooms. Governor Scott’s recent directive to FWC and DEP to implement such action in partnership with local communities, Mote and others is well- appreciated leadership. Scientists from Mote, FWC and DEP are working tirelessly with many partners in our local communities to respond to the current HABs events.

As we see the impacts of these blooms, we are all sharing a blend of emotions – sadness, resolve, anger, desperation and hope for the future. An unfortunate part of human nature is to sometimes feel the need to point a narrow finger of blame and believe that if only we were able to change one thing, the problem would go away.

The causative reason for red tide is just not that simple, and when the facts of science do not implicate a single simple cause of a bloom, it is counterproductive, at best, for any group – left, right or center – to malign results from decades of objective scientific research. Perhaps it’s time to tone down political and emotional rhetoric and work together to support innovative research and technological development to actually mitigate the impacts of red tide and get our marine and coastal ecosystems back in balance.