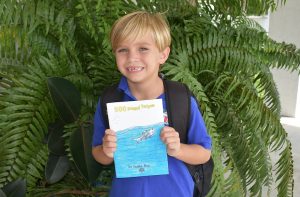 There’s a new author in town, and he happens to be a first grader at The Island School.

Hampton Boney had a dream last year that he caught a 500-pound tarpon, breaking the record for the biggest fish ever caught of that species.

His vivid memories from that dream inspired him to write and illustrate the story, hoping that it might be able to help scientists at Mote Marine Laboratory in Sarasota continue their important work with red tide research.

He wrote the book in January, and it took him about a month to complete.

“Every night I would go home and write one page,” he said. “It was hard work.”

The paperback is about a fishing captain named Bob, who has caught a shark and a baby tarpon. After hours on the water, he hooks a larger tarpon, but it gets away. He later gets another bite, and it’s a giant tarpon that he pulls to the boat and estimates it to be about 500 pounds.

The book is illustrated so that it is also a coloring book.

Hampton may have the opportunity to be a featured artist and have his book sold at the Mote Aquarium store in Sarasota.

The 7-year-old author is enthusiastic about all things fishing. He loves the water, and his goal is to one day become a marine biologist. Though he dreams of catching a gigantic tarpon one day, he is proud of the juvenile one he caught in the creek behind his house.

The family lives in Placida, and Hampton caught his first tarpon in the canal behind their home in April. He dedicated the book to his father, Bradford R., who takes him fishing all the time.

Hampton comes from a family of writers. His mother Anna is currently in the process of publishing a journal with Serbin Print Market and Publishing in Sarasota, the same company that published Hampton’s book.

“His book was published before mine,” she said. “It’s currently in production. My husband and I actually wrote it together. It’s a prayer journal.”

Anna is a substitute teacher at The Island School. She taught in Atlanta, where the family lived before relocating to Florida.

His older brother, Bradford, is in fourth grade at The Island School. He acts as Hampton’s “agent and publicist.”

Although Hampton said it was hard work completing the book, he encourages other kids to write their own books, too.

“Write about something that makes you happy,” he said.

Hampton has already sold 140 copies of his book, and he’s currently working on his second book, “105- pound Trout.”

“His third book is going to be about snook,” Bradford said.

The book is now available for $10, with 10 percent of the proceeds going to Mote Marine.

The books are also available at the Mote Marine Boca Grande Outreach office located at 480 East Railroad Ave. You can also order one using Venmo (@Anna-Boney).

Be on the lookout for Hampton’s book in stores on the island. A book signing is planned to take place in October at The Tide gift shop, located in the Old Theatre building. Keep reading the Boca Beacon for updates.

To order a copy and have it delivered to you, email Hampton’s mom at annaboney@gmail.com.

To have the book shipped, order online at prayerkeeping.com/products/500-pound-tarpon.