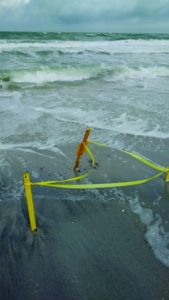 A turtle patrol volunteer said one zone alone had 84 nests on Monday, July 18.

“We are (along with the rest of Southwest Florida) having a record year for nests and crawls,” said turtle patrol volunteer Melissa Czank.

Guests at the The Boca Grande Club had an exciting morning recently when they witnessed a rare daytime hatch on Friday, July 8. See facebook.com/seaturtleawareness for the live video of the baby hatchlings.

Hatchlings face many predators, both on their way to the water and once they get into the ocean. On the beach, birds, crabs, ants, bobcats, raccoons and coyotes and even unleashed dogs are common threats to nests and newly hatched turtles. Once in the ocean, they face a host of marine predators until they reach adulthood.

“Predator activity increases as hatching season begins, and there have been a few nests that have been opened or dug up by predators this season. Raccoon, coyote and bobcat tracks have been reported. Typically, less than 20 eggs (of nests with approximately 100 eggs) are taken; however, once opened, birds and ants can infiltrate the nest and cause even more destruction,” Csank said.

Turtle patrol members would like to remind residents and island guests to please stay away from active nesting areas. Do not allow your children or your pets near the nests, as activity in the area may result in injuring the eggs.

If you find hatchlings on the beach, it is recommended that you let them crawl to the ocean on their own. Maintain a safe distance, and make sure lights are off so hatchlings don’t become disoriented. Do not remove them from the nest, and PLEASE do not harass and follow them with flashlights at night (see box at right for ramifications of those actions). Education is great, but not at the expense of our baby sea turtles who will become disoriented.

If hatchlings are found wandering away from the ocean or found during the day with birds circling, call the Florida Fish and Wildlife Conservation Commission at 888-404-FWCC for assistance, stay away at a safe distance, and try to keep predators away until they reach the water … but do not touch!

Donations for the nonprofit organization are always appreciated. For more information, go to facebook.com/seaturtleawareness.