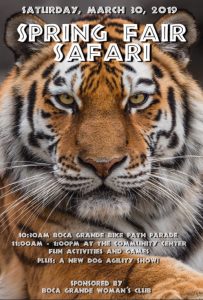 The Boca Grande Woman’s Club is pleased to announce that the Boca Grande Historical Society will serve as honorary Grande Marshall of the 2019 Bike Path Parade. The parade will begin at 10:30 a.m. on Saturday, March 30, and will follow the Bike Path from 5th Street to the Community Center grounds, where the annual Spring Fair will be held.

Since its beginning in 1995, the Boca Grande Historical Society has had as its main purpose the preservation of historical material in accessible archives and the sharing of local, regional, and state information. Since September, the archives have been accessible to everyone via the Society website so that the researcher has quick access to information, and the casual reviewer can peruse a collection of photos from the past. The digitalization and electronic cataloguing of the information represents a major commitment by the Society and benefits the entire Boca Grande community.

In November of 2018, the Historical Society launched its current exhibit, “Boca Grande: Once a Railroad and Industrial Town,” which chronicles much of our 20th century history. To date, over 1,300 individuals have visited the exhibit.

The Woman’s Club salutes the Historical Society for its dedication to preserving our island heritage.

Newer PostChowder, anyone? How about a little Ellen deGeneres on the side?
Older PostParking rangers kept busy with improper parkers