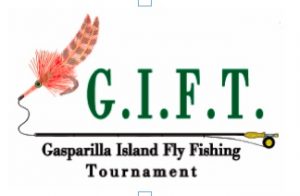 The 24th annual G.I.F.T – Gasparilla Island Fly-fishing Tournament – presented by Gasparilla Outfitters, will be held on Tuesday, Nov. 26, and will benefit the Boca Grande Historical Society. The time for fishing will be 9 a.m. to 2 p.m., and all anglers will meet at the Pink Docks. The pretournament captains’ meeting/cocktail party will be hosted at Scarpa’s Coastal Restaurant in downtown Boca Grande at 6 p.m., Monday, Nov. 25. Everyone is invited, whether fishing or not.

1) All teams will consist of two anglers. Guides may fish with one angler, not with two anglers.

2) First-, second- and third-place prizes will be awarded on total combined length of the two longest redfish entered from each team on official measuring board.

3) In case of a tie, the team with the longest redfish will win.

4) Each fish measured must be photographed on a cell phone with the official tournament medal clearly visible near the tail, and sent by text to tournament director at (941) 628-2175 to be official.

5) All fish will be measured tip to tip, mouth closed against a 90-degree angle on tournament measuring tape. The tail may be “pinched” and “fanned” to determine the maximum length. Length will then be rounded back to the nearest quarter inch.

8) No landing nets may be used.

10) All decisions by tournament officials are final.

The entry fee is $150 per angler, as a charitable donation to the Boca Grande Historical Society. Each entry includes two tickets to the captains’ meeting/cocktail party. Additional guest tickets are $50.

“We are excited that the proceeds from this tournament will benefit the Boca Grande Historical Society,” said tournament founder and coordinator Capt. Sandy Melvin. “They are very important to the community. I foresee we will continue donating our tournament proceeds to them in the future.”

Call Gasparilla Outfitters at 964-0907 with questions or to register.