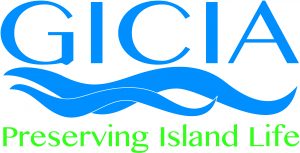 BY MISTY NICHOLS, EXECUTIVE DIRECTOR OF THE GICIA – The GICIA’s Mercabo Cove Project is showing signs of progress. Construction firm TSI Disaster Recovery along with Project Engineer and Manager, Hans Wilson of HWA, are keeping the project on schedule.

At this time construction continues, but once the hardscape is complete the planting of native plants and grasses will begin. The final phase of the restoration will be the installation of seagrass in the improved and restored Cove.

In recent weeks, nearly 13,400 cubic yards of fill has been trucked to the site and placed in the main channel. This has brought the depth of the main canal to a depth that is suitable for seagrass growth and regeneration.

The flushing channel, which will connect the Cove to the bay allowing tidal flow and flushing of the cove area, is currently being excavated.

A bridge that will allow access across the new “tidal creek” to the peninsula is currently under construction. Grasses, which had been planted during the 2016 uplands restoration and are now in the path of new tidal creek, have been relocated to the new living shoreline area.

This is the only section of the project where the seawall has been completely removed to create a planted tidal area. Reefballs have been placed at the toe of this area for stabilization and more native salt tolerant species such as Spartina grass, mangroves and buttonwood trees will be added. Once completed, this shallow tidal area will create habitat for juvenile sport fish.

The GICIA’s goal for the Cove, which is slowly coming to fruition, is to transform the basin area of this former industrial marine site into a marine sanctuary. The Mercabo Cove Project has been designed to ensure long term benefits including improved water quality, enhanced fish and bird habitat, reduced seawall maintenance costs and visually enhanced views of the preserve site. Construction began on March 2 and is right on schedule .

GICIA is extremely appreciative of the Boca Grande Community’s generous support of this project that is estimated to cost $2 million. When the GICIA purchased this 30- acre parcel it housed nine buildings including dry boat storage, conference center, office and small hotel, room for 185 wet slips, and 4,700 feet of seawall located at the entrance to Gasparilla Island.

By the end of 2016, the GICIA had successfully demolished the buildings and planted over 3,000 native trees, grasses and shrubs on the site creating a visually attractive native bird and wildlife sanctuary that will be forever protected from development.

Once completed this innovative restoration will enhance habitat for juvenile snook, tarpon, the critically endangered smalltooth sawfish, dolphin and manatee.