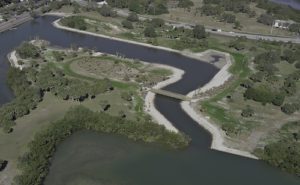 SUBMITTED BY THE GICIA – In January 2016, the Gasparilla Island Conservation and Improvement Association successfully acquired the Mercabo property located at the entrance to Gasparilla Island. It was in late 2015 that a rumor began to circulate that an offer had been made by a resort developer to purchase the 30 acres, armored by 4,700 linear feet of seawall, potential for a large resort with 185 wet slips. During this same time period Charlotte County had renewed efforts to amend its Comprehensive Plan that could have increased density on the site from 3.5 units per acre up to 65 units per acre. The GICIA, generously supported by almost 1,800 individuals, raised the $20 million to purchase the property and ensure its protection from being developed.

Following the successful acquisition, the GICIA’s first effort was to demolish the 9 buildings and remove the concrete and asphalt from the site. When the upland restoration was completed in the summer of 2016, discussions turned to the possibility of a project that would enhancing marine habitat. The GICIA expanded the conversation to include coastal engineers and biologists and it quickly became clear that through thoughtful design and engineering the basin could be transformed into a marine sanctuary with improved fishery habitat and water quality.

The GICIA hired a coastal engineer to begin formulating a plan that would maximize habitat, improve aesthetics and reduce long term maintenance of the 4,700 linear feet of seawall. As the GICIA waded into the planning phase of the project, it was discovered that the Mercabo site sits within the northernmost boundary of the federally designated smalltooth sawfish protection area. This triggered the need for the GICIA to obtain approvals and receive both a Florida Department of Environmental Protection and a US Army Corps of Engineer permit for construction.

Both permits were obtained and both agencies were impressed by the GICIA’s commitment to restoring the Mercabo site. In fact, when a sawfish biologist recently saw the finished project his comments were “What a transformation. I’d like to share before and after pics with our team along with some of the metrics (shallow water habitat gained, mangroves, etc.) because we don’t see this kind of project very often outside of full-scale restoration work. But this is an unusual reclamation of conservation habitat from essentially an industrial site.”

In the GICIA’s effort to improve water quality in the dead-end canal of the Mercabo site several strategies were implemented to increase water flow and circulation. First, a flushing channel was created on the southeastern most side of the canal. The 30’ wide by 100’ long opening now allows for significant water exchange between the canal and the open waters of the bay.  Next, roughly 15,000 cubic yards of material was used to fill and contour the bottom of the canal so the maximum depth is now -4MHW. The shallower areas will support better flushing and will also support a planned effort to reintroduce seagrasses to the Cove.

Seagrass is temperamental and will only grow in shallow, clean, clear water but once established seagrass beds are considered one of the most productive ecosystems in the world. Their leaves absorb nutrients (even from runoff) and their roots trap and stabilize sediment, which not only helps improve water clarity and quality but also reduces erosion and can buffer the coast against storms. Seagrasses provide shelter and food for many forms of marine life from tiny invertebrates, fish, crabs, turtles, marine mammals, and birds.

The GICIA will work with biologists from Sea & Shoreline, a Florida-based aquatic restoration ﬁrm that has two decades of experience restoring fresh and saltwater habitats, to plant 3,400 units of seagrass within the cove area. Divers, over the course of a week in March will plant each grass unit by hand. Once the planting is completed the biologists will monitor and maintain the grass for 12 months, which will give each small grass unit time to become fully established.

As the GICIA celebrates 50 years working with the Boca Grande Community to preserve island life, the Board of Directors and staff are grateful for the continued support of the island’s residents in all GICIA’s efforts.

The next time you drive off island, take in the beauty of Mercabo Cove Preserve, then imagine the same site today if there was no GICIA.

Newer PostReady to catch the big one? Mark your calendar for the youth fishing tournament on February 27
Older Post‘A Better Shot’ program at Lemon Bay Golf Course celebrates 25 years of giving to the community