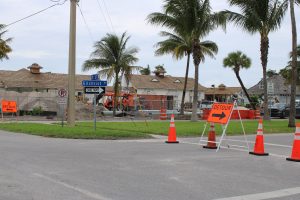 BY MARCY SHORTUSE- Road construction and detours can now be found at the north end and in the downtown area of the island, as several roadway projects are taking place.

The Gasparilla Island Bridge Authority’s Southern Roadway Sidewalk Project, which began on August 31, is expected to create one-way traffic situations on Gasparilla Road at the north end for several months to come.

The project consists of constructing paved roadway shoulders, a concrete sidewalk with concrete curbing, and a crosswalk on the GIBA-owned portion of Gasparilla Road from Gulf Shores Drive (north) to 600-foot north of Gulf Shores Drive (south), connecting to the GICIA cart path.

There will be one lane traffic necessary during active construction hours Monday through Friday, 7 a.m. to 5 p.m.

Lee County storm sewer improvement work in the area of Gilchrist Avenue and 5th Avenue should be completed by the end of the month, but at this time there are intermittent detours and delays.