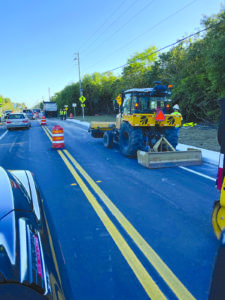 BY KATHY BANSON-VERRICO OF GIBA – The mission of the Gasparilla Island Bridge Authority (GIBA) is to maintain safe and efficient vehicular and pedestrian traffic flow at all times through the toll booths, along the causeway and along the Intracoastal Waterway, and to make fair and balanced decisions which impact a diverse group of stakeholders including owners, travelers, local businesses, and employees. The recent roadway safety project is another example of how GIBA uses your toll dollars to fulfill that mission statement.  The reason for this project was to improve passage for pedestrians and bicycles from Gulf Shores North on the west side of Gasparilla Road to the existing GICIA bike path.

Why did GIBA initiate the project? – In June 1958, the Florida Bridge Company purchased the Right of Way (ROW) from Placida Road south including the three bridges and 2.9 miles of causeway. In January 1998, GIBA, through the purchase of the causeway system, received the same ROW.

January 2019 – The GIBA Board instructed their attorney and engineer to perform detailed research to clarify actual ROW limits. Results confirmed GIBA’s existing ROW was limited on the western side of Gasparilla Road and not expandable into the existing greenway. This space limitation provided GIBA with enough area to accommodate a shoulder, protective curbing, and a five-foot (5’) impervious surface.

April 2019 – The GIBA Board discussed the possibility of acquiring the additional Charlotte County ROW bordering Gasparilla Road to link the proposed five-foot (5’) surface with a new crosswalk/flashing signal to connect travelers safely with the GICIA bike path.

March 2020 – The Charlotte County Board of Commissioners approves the ROW transfer.

April/August 2020 – The GIBA final safety design was prepared and advertised for public bid. The contractor was selected, and construction began in September 2020.

The project was completed in December 2020 by EHC Construction Inc. from Naples, Florida. The total cost of the project including engineering, construction and legal fees was $500,000.

These are your toll dollars at work.

Why wasn’t the “path” made wider?

GIBA added surface to the maximum allowable width within our ROW. Department of Transportation language specifies that a five-foot (5’) concrete surface is referred to as a sidewalk, so the southern roadway project can be called a sidewalk or concrete path.

Why does the “path” not extend to the corner of Gulf Shores south?

Charlotte County owns and maintains the roadway from the new crosswalk to the Lee County line.

Why does the crosswalk not go directly into the shopping center?

The GIBA Board in consultation with the engineers concluded that pedestrians crossing Gasparilla Road close to the curve, and to exiting vehicles (even with a flashing light) was not the safest road crossing.

Who owns and maintains the asphalt path on the eastern side of Gasparilla Road?

That path is part of the Charlotte County ROW.

Kathy Banson-Verrico is the executive director of GIBA.