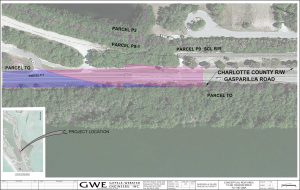 The Gasparilla Island Bridge Authority board voted to add a sidewalk on the west side of Gasparilla Road from Gulf Shores to facilitate pedestrian travel along the existing GIBA right-of-way at their quarterly board meeting on Wednesday, Aug. 20.

GIBA attorney Rob Berntsson and GIBA engineer Jon Cole have been researching the right-of-way ownership of Gasparilla Road south of Gulf Shores Blvd. The GIBA board voted to approve the right-of-way acquisition from Charlotte County to connect the proposed sidewalk to the GICIA bike path, which is approximately 50 feet south of the existing crosswalk (just past Kappy’s).

Executive Director Kathy Banson-Verrico reported that the toll collection system upgrade of all software and hardware is on track to be completed by the fall of 2019. To date, GIBA staff has exchanged more than 12,000 cards and stickers. The exchange will continue through the next months and is anticipated to be completed by December. All current toll rates and policies will remain the same.

The final phase of toll lane upgrades will include the customer service module and the creation of a new GIBA interactive website.

The website will require improved internet speed, as CenturyLink is in the process of upgrading the GIBA service to 500 Mbps. The service should be installed within the next 60 days.

The end lift reduction unit that was approved at the May 20th engineering meeting has been manufactured and is on site.  The final design for the emergency hydraulic jack system has been approved for local manufacture.

The paving project to mill and resurface from Placida Road to the toll plaza began on August 20 and is expected to be complete by August 26.

The draft FY20 GIBA budget was reviewed and approved. Revenue was budgeted at an increase of one percent, and expenses were decreased by one percent. The GIBA board approved a long-term debt prepayment of the SunTrust loan of $1.5 million to be made in fiscal year 2019 .

GIBA will continue to build cash reserves to fund capital projects and repay the long-term debt to the State Infrastructure Bank.