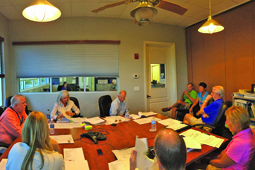 The Gasparilla Island Bridge Authority has now entered into two different agreements with local agencies regarding allowances to waive weight restrictions on the Boca Grande Causeway, as of their quarterly board meeting on Tuesday, June 28.

Representatives Bill Caldwell and Bonnie Pringle from the Gasparilla Island Water Association came to the board during the meeting to ask for their construction contractors to cross the bridge system at FDOT weight limits while GIBA’s temporary overweight policy is in place, without paying a permitting fee and the additional crossing charges. In a letter dated June 10, 2016 sent to the GIBA board, GIWA Utility Director Bonnie Pringle wrote, “From the start of the planning stages of your new bridges, we have anxiously awaited an increased weight limit consistent with FDOT standards.

With GIWA’s type of operations, there are times that the added weight limits would make serving the community more efficient as well as safer for our workers … we are forced to use undersized equipment because the proper machinery for the job weighed too much to cross the bridges. As a result, repairs are more difficult and take longer, leaving services interrupted and roads impacted for a longer period of time …” Chair Ginger Watkins and Board Member Lee Major had qualms about the agreement, under the pretense that making one exception opens the doors for others. “We are beginning a process that will continue through until we make a decision one way or the other. This board has a right to do what they choose to do,” Ginger said.

Major agreed. “Once you start making exceptions to anything it’s a slippery slope. What organizations are there that serve everybody, or almost everybody, or kind of everybody? I think you have to word it carefully, and start carving out things.” Major was referring to other entities such as power companies who would need to bring bigger machinery out to fix emergency power situations. Watkins, once again, referred to a “slippery slope.”

Board Member Bill Klettke said he would hope that any equipment necessary in the case of an emergency would be brought across the bridge to fix things expediently. Watkins countered by saying if a storm-related problem occurs, the bridge board will not have a choice … the sheriff’s office will have the authority to determine who can cross the bridge and who cannot. The board eventually accepted the agreement on the basis that it is an agreement with a public, rate-regulated, not-for-profit organization and on an emergency basis only. The motion to accept the agreement was agreed upon by all with the exception of Watkins, who voted no. I care about it, but we cant ‘one-off” forever,’ she said. “We have to make the big decision soon.” She was, of course, referring to the weight restriction discussion that is to take place in the fall. The GIBA has said they would, in fact, make that decision at their November 16 meeting. The second agreement is the interlocal agreement signed this month between GIBA and Lee County DOT, allowing them to bring heavy equipment and loads across the bridge in order the pave the island’s roads.

In the executive director’s report, Kathy Banson-Verrico announced that the toll lanes would soon have a credit and debit card option for payment. Banson-Verrico said that the credit card machines will only be employed after hours, and for full fare tolls only. “If someone comes up to the toll lane at 10 p.m. and they realize they don’t have the cash, they can now use their credit or debit cards,” she said. “Wireless machines will be used, and training for toll takers will begin next week. We are expecting the machines to be working by next weekend.”

Banson-Verrico also discussed a bridge historical exhibit GIBA is currently working on with the Boca Grande Historical Society. “We’ve spent a lot of time with them and they have some really great ideas.,” she said. “They will be dedicating the entire museum to the bridge for a certain amount of time.” She described the exhibit, which will have a life-sized picture in the window of a toll attendant, and the old swing bridge controls set up with an iPad to simulate a bridge opening. The exhibit will also feature videos, interviews with patrons of the bridge and more than 200 photographs.

The board decided instead of loaning the items to the Historical Society, they would allow them to be kept for as long as necessary, then disposed of to another museum eventually. A motion was passed to spend $11,400 on the exhibit. In the Chairman’s report Watkins explained how Robert’s Rules of Order are so important to follow in GIBA meetings, and how vital it will be in the future to make sure they are strictly followed.

She also brought up the GIBA Act, which is the governing rules the board follows, and two aspects in particular. “ There are two things highlighted,” she said, “One is them in this enabling legislation is involving the regulation of traffic. We must regulate traffic concurrently with Charlotte and Lee Counties. However, then it says in the event of a conflict, the more stringent of the rules will apply.” Watkins said this specifically allows them to determine things such as what the speed limit on the Causeway will be. Then she continued. “Section 15 of the Act states we don’t have to do an RFP for everything we do. It is binding by the lowest bid, no choice. There’s nothing in there that prevents the authority from hiring people such as technicians or financial experts … we don’t even have to put these out for bid. Nothing in the legislation that forces us to do RFPs for these technical people.” Watkins also told the board they were planning a party to dedicate the new swing bridge sometime in October or November.

Newer PostIn for a 4th of July cart parade? Let’s do this!
Older PostRespect turtle nests this holiday weekend