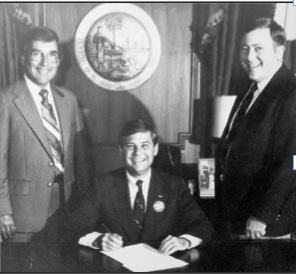 Editor’s note: This is the third in a series of articles about the forces that have shaped development in Boca Grande and on Gasparilla Island.

It’s a scene from the early 1980s that islander Sue Shaffer will never forget: Creighton Sherman climbing to the top of the Silver King complex with a measuring tape in hand.

“Creighton wanted to make sure they were building the Silver King units within the requirements of the new law,” says Shaffer, who was the GICIA’s secretary at the time. “My memory was that they were right at the limit of the height restrictions.”

The Act was adopted in November 1980 after a hard-fought legislative and public relations battle by the GICIA. The Act restricts building heights to 38 feet above the average grade of a lot or to 42 feet above mean sea level, whichever is lower, and places limitations on population density, commercial zoning and island signage.

These days, the GICIA counts on Lee and Charlotte counties to monitor the heights of buildings and homes through the construction process. But Executive Director Misty Nichols is no less vigilant than Sherman was in shielding Gasparilla Island from the wrong kind of change.

“We meet every eight weeks with Lee County to review all permits that have been issued in the Lee County portion of the island. We remain alert to any violations or potential violations to the Act [in both counties] and call them in to the appropriate county code enforcement officer,” Nichols explains.

Although the GICIA has good rapport with the Charlotte County staff, the organization has supported Friends of Cape Haze in their opposition to Charlotte County’s comprehensive plan.

To help forestall any legislative actions that could jeopardize the Act, the GICIA employs a governmental affairs liaison in Tallahassee.

His “job is to keep his ear to the ground and remain informed of any discussions regarding the Act,” Nichols says.

The Act has been changed or amended only twice since its passage – both times at the GICIA’s initiation.

The first amendment, in 1983, was in response to a plan by an island resident and Tampa developer to purchase the Waterfront Motel (now the Innlet) and convert the units to time-share condominiums.

In its February 1, 1983 edition, The Boca Beacon quoted Ft. Myers attorney Terry Lenick, the developers’ representative, as saying that he met with Creighton Sherman who told him the association “had no problem” with the project.

Trisha Lowe, who was the GICIA secretary for 20 years, remembers differently.

“They came before the board and presented the plan and, of course, the board did not approve it.”

Not only did the GICIA object, but Sherman hired attorneys Leo Wotitski and Guy Batsal to draft an amendment to tighten the Act’s description of a “dwelling unit.”

The two lawyers were part of the team that had drafted the original Act.

“Before that happened, the potential buyers of the Waterfront decided the project wasn’t feasible. Nonetheless, the GICIA proceeded with the amendment” as a protection against future construction challenges, Lowe says.

The second amendment, proposed in the Florida legislature in 1986, created The Gasparilla Inn Historic Resort Area.

This provision allowed The Inn to modernize and build housing for employees on its 35.2-acre property. It also made it possible for structures that existed before the Act to be rebuilt in the event of a catastrophe, “Mac Miller (The Inn’s general manager) was worried that if The Inn burned, they would have to comply with the Act’s new restrictions to rebuild it,” Lowe explains.

The amendment brought Jack Harper, owner of Millers Marina and GICIA contrarian, back into the fray. If a legislative change to the Act was going to benefit The Inn, he wanted zoning relief for a 50-foot piece of land he owned.

Harper knew that no land could be used for commercial, industrial or multi-family purposes unless it was zoned for such use before passage of the Act. His property was zoned agricultural; he wanted it changed to commercial marine.In an effort to influence state lawmakers, Harper circulated petitions and captured more than 630 signatures in his favor.

In the May 9, 1986 Beacon, he took out a full-page ad asking for help and once again railed against the zoning restrictions in the Act.

He wrote: “Senate Bill 695 addresses certain problems that the Gasparilla Island Act has caused, but it does not make any provision to allow Millers Marina the proper zoning to add a much-needed two-story addition.”

Harper’s pleas did not sway the legislature. In June 1986 the Florida House of Representatives approved the amendment for The Gasparilla Inn. There was no special provision for the marina.Harper took the issue to court.

The GICIA intervened. After a year-long battle, Lee County gave in to Harper, offering a settlement that would allow him to apply for the necessary rezoning.A judge made the final decision, determining that  “the property – due to limiting factors – was not suitable for agricultural use” and therefore gave Mr. Harper the rezoning he requested, explains Nichols.

Most important to the GICIA, the judge’s ruling was limited in scope, thus protecting the Act from another challenge to its constitutionality. Harper would operate Millers Marina for another 15 years until, in a stunning conclusion to his sometimes controversial tenure in Boca Grande, he was arrested in late December 2001.

The former college football all-star was charged with 67 felony counts for what news wire services reported was one of the largest alligator poaching cases on record. Prosecutors eventually reduced the charges to one count of dealing in stolen property and four counts of identity theft in Polk Circuit Court. Harper, a Lakeland, Florida native (Polk County) was sentenced to five years’ probation, fined $1,500, forfeited his airboat to the State and was required to repay the State’s Fish and Wildlife department $15,000 for the cost of its 11-month investigation.

Harper did not respond to a request to be interviewed.

Meanwhile, the November 1, 2002, edition of the Sarasota Herald-Tribune carried a story about the “quiet and discreet” sale of Millers Marina to Boca Norte LLC of Venice in August for $5.5 million.

Millers Marina is now the Boca Grande Marina and was purchased for $6 million in February 2004 by Harbor Drive LLC of Boston, Massachusetts.

Shortly after the Harper challenge, the GICIA had its hands full again with Sunset Realty.

In April 1989, Sunset announced its desire to build two motels: a 72-unit motel on a four-acre lot near Gulf Shores Boulevard and a smaller one at the Courtyard complex (now the Boca Grande Resort) on the island’s north end.In May and again in July 1989, the Charlotte County Commission denied Sunset’s request, saying that – based on the Gasparilla Island Act – the realty company could build a motel with 20 units, not 72, on its four acres of land.

An attorney for Sunset said in the July 28 Beacon that the realty company would now challenge the Act and its amendments in court.

In December, GICIA said it would sue to stop construction if Sunset proceeded with its plans.In the end, the larger motel was not built. Sources familiar with Sunset’s history speculate that the concept was a “trial balloon.”

Nichols says the plans for the 72-unit structure and potential litigation were not mentioned in the GICIA’s meeting minutes beyond April 1990.

Its goals: to retain the small-town charm of Boca Grande and to protect the natural beauty, including the wildlife, of this sensitive barrier island.

“We should all be grateful for what the GICIA did back then,” says Sue Shaffer. “What has happened – and not happened – to the island has made it a very special place.”

In the coming weeks: Lee County sets up the Boca Grande Historic District in the late 1980s, hoping not to create a “procedural nightmare.”