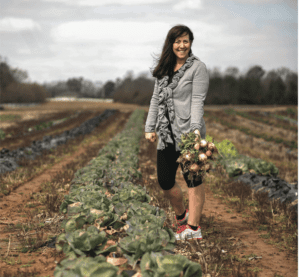 BY CATHERINE BALLMAN, BOCA GRANDE GARDEN CLUB CORRESPONDENT – One of the perks of being a good chef is the fun of cooking for fancy people. Elizabeth Heiskell has had that fun, preparing food for Priscilla Presley and Sarah, the Duchess of York, VP Al Gore and a fistful of politicians. But cooking for Thomas Keller, one of America’s greatest chefs, known for his indisputable high standards and The French Laundry, his Michelin-starred restaurant in Yountville, CA? The restaurant called “ … the best restaurant in the world …” by Anthony Bourdain? Even the most seasoned chef might cringe at the prospect.

Not the irrepressible Elizabeth Heiskell. For Ms. Heiskell, who spoke to the Boca Grande Garden Club on Wednesday, Jan. 6, it was part of her job as Lead Culinary Instructor at the Viking Cooking School, Greenwood, MS. Mr. Keller was in town on business with Fred Carl, owner of It was summer and it was South so what else but fried chicken and heaping bowls of farm-fresh vegetables? According to Mr. Carl of Thomas Keller’s take on the dinner, “He had the most memorable meal, more memorable than he had had in a long time.”

A lifelong Mississippi native, Ms. Heiskell learned to cook by hanging around the family kitchen where she watched a steady parade of BBQ, fried chicken and steaming platters of fried catfish, a Mississippi specialty, be brought to table. There were heaps of shrimp and grouper and crab, all fresh-caught. Biscuits and pies and Southern greens and succotash came forth from that Delta kitchen. Followed by pitchers of sweet tea, sometimes jokingly referred to as the preferred wine pairing of the South.

She turned her interest and appetites professional taking the rigorous Culinary Institute of America, Hyde Park, NY, course. A 25-year catering, recipe development  and writing career followed. You want a Mississippi Roast for dinner. Check out Ms. Heiskell’s recipe in Southern Living for her take on this recent Internet phenom. She cooks all-things bourbon and is known for her Bacon Bites, an inspired riff on Bill Blass’ famous bacon appetizer. Just the idea of Cherry Tomato Cobbler with Basil Ice Cream conjures us the best of creative Southern cooking. How about PB&J Wings?

The chicken wing recipe Ms. Heiskell cooked on The Today Show where she is a TODAY Food Contributor. But Southern food is not her only jam. She has a few other tricks up her sleeve, such as that millennial favorite, Avocado Toast.

So where does the “Debutante Farmer“ come in? Well, yes, she was a debutante as a young woman. She applied that experience in naming the farm adventure she and her family launched in 2011, buying 80-acre Woodson Ridge Farms just outside of Oxford. MS. From the beginning, she saw her mission as providing fresh crops to restaurants and other customers; one of those customers was St. Jude Children’s Research Hospital. Her plans attracted the attention of the very Southern Foodways Alliance. The institute which offers a laser focus on Southern food and eating documented the work on the farm, noting that in the first year the farm produced 37 different vegetables.

Of her years farming, Ms. Heiskell says what she learned informs all her work in the kitchen. She understands food products in a more precise way, choosing and using foodstuffs with a greater eye to choice and quality. Plus, she remains in the faming business by way of husband Luke who is building Whiskey Ranch near Oxford with a herd of Red Poll Cattle.

Ms. Heiskell is the author of four books, including The Southern Living Party Cookbook: A Modern Guide to Gathering. Garden Club members can order books and they will be sent signed copies by the famous Square Books in Oxford.