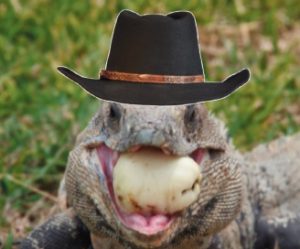 After a few emails and phone calls from this office to the Florida Fish and Wildlife Conservation Commission, a new message has been sent out to the public. Whether it will be broadcast worldwide like the first story was, we will soon find out.

On Thursday, July 25 the FWC sent out a press release with the caption, “FWC provides additional information on iguana removal.” It read as follows:

Green iguanas are an invasive species in Florida and are not native to our state. They can cause considerable damage to infrastructure, including seawalls and sidewalks. Iguanas, like all non-native, invasive species, are not protected in Florida except by anti-cruelty law. While they cannot be relocated, they can be removed from private property with landowner permission.

“Unfortunately, the message has been conveyed that we are asking the public to just go out there and shoot them up. This is not what we are about; this is not the ‘wild west.’ If you are not capable of safely removing iguanas from your property, please seek assistance from professionals who do this for a living,” said FWC Commissioner Rodney Barreto.

Addressing the impacts of non-native species is a priority in supporting conservation of our ecosystems. For those who need assistance, there are resources available on FWC’s website, including contact information for professional trappers.

In our July 11 edition we talked about the media blast the FWC was getting regarding their seemingly cavalier attitude toward private citizens disposing of iguanas of their own volition. We also talked about the fact that this was not “new” news, but obviously the fodder of some bored reporter with too much time on his or her hands, simply reading the iguana descriptions on the FWC pages. There was no news release put out. This was existing information that had been listed under “green iguanas” for quite some time. That fact was confirmed by an FWC representative named Melody Kilborn, who works in our area’s regional office.

So when we called Melody and asked her some questions about why green iguanas were treated with such bloodlust on their website while spiny-tailed iguanas were barely mentioned, she said she honestly didn’t know.

After some explaining and some more questions, she asked us to put our questions in writing and send them to her. She also said she would speak with her bosses about putting out a more carefully worded press release regarding extermination of iguanas in the private sector.

One part of that came true, as you can see by their press release. You will also notice, though, it does not address spiny-tailed iguanas at all.

As far our other questions that were supposed to be answered, they have not been. Our third-request email was sent this week, and still no one has responded. The content of those three emails consists of three questions:

Stay tuned. We will attempt to get an answer to you when one comes to us.

In the meantime, if you are a homeowner here on the island and you’re getting reports that the iguana population has exploded, the numbers are the same. This is just the busiest time of year for our leathery friends to come forth and socialize. The more heat we have, the more they love it. The more rain we have, the thicker the foliage is and the more places there are to hide. If you really want to help to make a difference, consider having your landscapers cut back a bit of the thick greenery, especially the kinds that have the flowers iguanas love to eat.