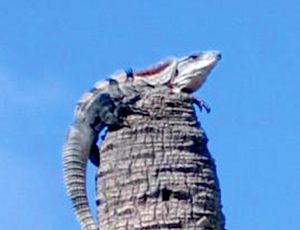 A flurry of excitement has recently swept the globe regarding the Florida Fish and Wildlife Conservation Commission’s lenience in allowing private citizens to kill iguanas on their own property. While it may seem like news to some, truth be told no one is really sure who  made it seem like something new – and why.

According to Melody Kilborn, the Southwest Region media spokesperson for the FWC, no new press releases regarding iguana eradication have been sent out. Nothing has changed regarding their iguana regulations, she said.

“I think some people have perceived this as a policy change, but it isn’t,” she said.

While the origin of this latest “news” blast may forever remain a mystery, what is even more of a mystery is why the agency seems to make a great deal more of green iguana eradication than black spiny-tailed iguana elimination.

While it’s true that green iguanas are non-native, nuisance creatures that defecate frequently and everywhere, eat native foliage and can do damage to homes, black spiny-tailed iguanas are much more destructive on the whole.

Green iguanas, though, are given a hideous rap. In the first paragraph it is mentioned that homeowners are allowed to kill them without a permit.

When asked why the FWC barely mentions anything on their website about black spiny-tailed iguanas, Kilborn said she wasn’t sure why. In fact, she wasn’t aware that spiny-tailed iguanas had almost wiped out our island’s population of nesting birds and native anoles, and had made quite a dent in the sea turtle hatchling population as well. She also didn’t know that they are omnivorous, while green iguanas are herbivores. She said it seemed to her that the biggest danger that could come from an iguana of any kind was a bite.

Kilborn admitted that the agency is still working on getting up to speed with their iguana knowledge.

“When we do public meetings and workshops, we talk about the means the FWC uses to get rid of iguanas, but we don’t necessarily have guidelines,” she said. “It needs to be brought to the agency’s attention. It is something that will evolve over time.”

Iguanas aren’t necessarily a danger to people, but like any wild animal, if they are cornered they could bite. That is a major issue.

When asked what methods the FWC prefers homeowners to use to kill iguanas, she said she didn’t know, but that she would check. As of press time that question had not been answered.

We will keep you posted as to how the FWC responds.

In the articles that have been published lately (some from as far away as the UK), the generic term “iguana” has been used, peppered with the term “green iguana.” Again, though, no mention is made of spiny-tailed iguanas in any of them. However, that might lead people to believe they can use methods used to kill green iguanas on spiny-tail iguanas. In many cases, those methods won’t work on our lizards.

George Cera, Lee County’s Gasparilla Island iguana trapper, said shooting spiny-tails with a pellet gun won’t be terribly effective in most cases, as you must be close enough to the lizard for the pellet to break through the body, all the way to its internal organs. He almost always uses .22 rat shot, as well as the occasional snare.

The difference between Cera and a private citizen, though, is that he is bonded and insured … and has been doing his job for many, many years.

Shooting in a congested area, not to mention in a wildlife sanctuary (which our island is), is tricky business to begin with. Make sure you do your research prior to deciding to buy a gun and go shooting lizards on Gasparilla Island.