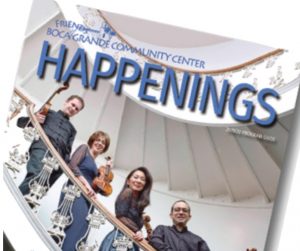 Friends of Boca Grande Community Center recently released the 2019/2020 program guide promoting all of the events the organization will be hosting this upcoming season.

Two symposiums are planned this year: The Global Migration conference and an American Revolution seminar.

Program Director Debbie Frank. “We will have a speaker from Britain who will be giving an international perspective on current issues.”

One of Boca Grande’s own residents will be speaking about his experience as  a backcountry hiker. Tom Cross will present “A Backpacker’s Guide to the Wilderness” on Wednesday, March 25, 2020.

The Boca Grande Film Festival is planned for February 19, 20 and 21 in 2020. It will feature eight films at three different island venues.

“It’s all onsite at the Community Center, and all three theaters will be set up for a positive viewing experience,” Frank said  “There will be enhanced surround sound and other improvements. There will also be more food and beverage options.”

The popular free outdoor concerts will return this year, with the first one planned for Saturday, November 23. American Made Band will be featuring a Blues Brothers tribute. The concert is scheduled to take place at 4:30 p.m.

Local residents Erica Martin and Roger Lewis are putting together a patriotic concert featuring performers from Boca Grande. “1776 – The Concert: An Evening to Celebrate the Founding of America” is planned for Wednesday, April 22, 2020.

“We are really excited about all of our programming this season,” Frank said. “There is so much for everyone to enjoy.”

Also new this year will be an Irish Celtic festival with three different bands the day before St. Patrick’s Day.

The Friends are also introducing a new SMS text notification feature. They plan to use this outlet to send out reminders for programs that people have signed up to attend. To opt in, simply text the word “FRIENDS” to (941) 964-0827. You can choose to opt out at any time by replying “STOP.”