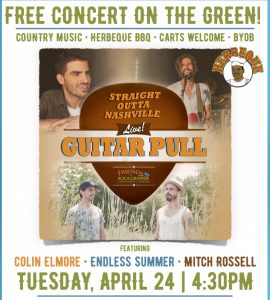 The event will feature Colin Elmore, Endless Summer and Mitch Rossell. Colin Elmore and The Danville Train signed a developmental record deal with Sony Entertainment, as well as a booking contract in 2016.

Endless Summer is a Canadian-born country music duo consisting of twin brothers Bob and Clint Moffatt, formerly of the band The Moffatts. To their credit, Bob and Clint have six international chart-topping albums selling more than six million units across 40 countries.

“Ree Guyer is CEO/President of Wrensong Entertainment, a music publishing/artist development company with offices in Nashville and Minneapolis,” Frank said.

Garth Brooks was quoted as saying, “Mitch Russell has one of those voices that spins your head around the second you hear it, but that is only the beginning. Once he has your attention – get ready for some of the best lyrics and melodies you have ever heard.

Delicious barbeque from Herbaque BBQ will be available for purchase at the show. BYOB and golf carts welcome.

Newer PostPioneer fishing families of Cayo Costa to air in May
Older Post‘Boca Grande Sketchbook’: An island through the eyes of Jack Horner