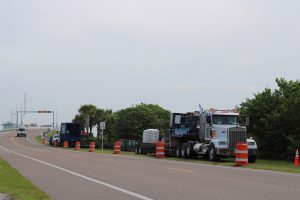 BY OLIVIA CAMERON- On the road that spans from the north end of the island, service trucks and equipment have cut the coastal view short.

Just off the Boca Grande Causeway Bridge, equipment and cones have lined the road while multiple workers operate machinery in the heat. The construction has been said to improve Little Gasparilla Island’s electrical connection.

Kathy Verrico, executive director of the Gasparilla Island Bridge Authority, has claimed the project to be under the Florida Power & Light Company.

“FPL is using directional boring to improve the connection on the island after the recent outage,” said Verrico.

Prior to the implementation, the south end of Boca Grande was experiencing difficulties with internet connection that lasted for around two weeks. Verrico has mentioned previous electrical problems in the surrounding area to be a cause of the sudden construction.

Directional boring typically encases utilities underground without digging up trenches. This technique of installing pipelines is utilized under rivers, around roads and structures to make the process seamless.

To Verrico’s knowledge, the FPL team planned to work roadside for the next few weeks.

When an FPL employee was asked to speak on the project, he stated that would not be within his contract.

Electrical complications may come as a package deal to being an island resident, but certain measures could improve the quality at Little Gasparilla.