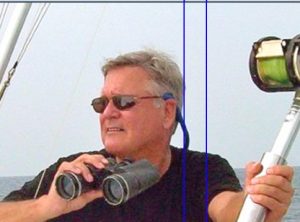 When four guys get together, it could mean a round of golf, a game of tennis or an evening of poker. In Boca Grande on Friday, Jan. 25 at 5 p.m. it means the opening reception for the Guys Art Show at the Art Center at 236 Banyan Street.

“Each of us has a different style and approach to art. We thought it would be fun to get together and share our work and our perspectives with the public,” says John Mitchell. “We hope the community enjoys our efforts.”

Larry Anderson grew up in Randolph, New York, realizing that he had a natural gift for art. But it wasn’t until he moved to Florida in 1985 for a construction project that he was able to jumpstart his artistic career.

At that time, Larry was asked to do hand-painted furniture for an interior designer in Boca Grande. That project started him in a new direction that has taken him into murals, faux finishes, sculptures and canvas paintings. He also taught art at the Boca Grande Art Center for many years.

Larry’s artistic style moves from impressionist to realistic, from watercolor to oils and beyond. He never limits himself. Inspiration for new art pieces comes to Larry from unusual places, like his watercolor fish paintings that feature the shimmer of embellished silver, gold and pearl leaf finishes. A ceiling he was faux finishing reminded him of fish scales – and a new idea was born.

Nearly a decade ago, Larry mastered the process of acid staining on concrete floors and countertops. Today, he combines his artistic eye and his blank canvas of concrete and creates magic. He also makes custom bathroom sinks that come in different shapes, including a flower, sea shell, koi pond and sea turtle.

For 35 years, Johan Bjurman was involved in the arts through outdoor advertising as a pictorial painter, movies as a scenic painter, designing and painting large scale murals and historical restoration. Now retired from his commercial endeavors, he has turned his attention to his plein air landscape painting.

Johan’s primary interest is in working from life for a better understanding of light, space and the energies of the environment. Seeking to refine the craft and define a truer identity in painting is his life goal.

In recent years, Johan has divided his time between painting typical New England landscapes, particularly around Narragansett Bay, Rhode Island, and capturing the vistas and wildlife of the Florida suncoast where he resides.

He is a member of the Oil Painters of America, the Copley Society of Boston, the Englewood Art Center, where he teaches plein air painting, and the Light Chasers and Peace River plein air groups.

Jack Horner is probably best known among the Boca Grande male set as the creator and instructor of the popular Watercolor for Dudes program at the Art Center. He conducted the class from 2003 to 2017.

Jack has a diverse background in watercolor, oil and pastels. He is a member of the Allied Artists of America of New York, the Virginia Watercolor Society and the American Artists Professional League of New York.

He has won numerous awards, including a first place in the Oil Painters of America, East/Southeast show in 2002 and a place in the traveling show of the Kentucky Watercolor Society of 1995.

John Mitchell had a flare for art from an early age, taking every art class offered in middle and high school in Michigan, where he grew up. As a high school junior, his work was submitted to the Youth Talent Exhibition for high school students in the Lansing, Michigan, area. The work received blue ribbons. John graduated with a degree in design from Western Michigan University, where he had several one-man shows in the student union.

In 1964, he sidelined his love of art (only briefly) to enroll in the Wisconsin Institute of Mortuary Science. He graduated with honors and embarked on a lengthy career in funeral services with his wife, Gloria. John and Gloria were members of National Selected Morticians, with John serving on the association’s board of directors and as its secretary/treasurer.

“Through all these years I have always had a sketchpad, paintbrush or something artsy in my hands,” he said.

After retiring to spend the season in Boca Grande, John became an exhibiting member of the Art Center. He served as its president and coordinated the popular Art in Bloom spring show. John’s works hang in many collections on island and in various locations across the country.