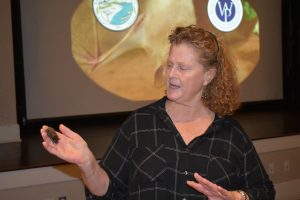 While a tiny evening bat sat nestled in the front pocket of her jacket, Shari Blissett Clark gave a 90-minute presentation about Florida bats at the Boca Grande Community Center Auditorium on Friday, Oct. 25.

Clark is president of the Florida Bat Conservancy. She’s dedicated the past four decades of her life to educating the public about the important roles bats play in everyday habitat diversity and health.

Clark began the presentation by talking about common myths concerning bats. She said they can see just fine (particularly in the dark), and less than one percent will ever contract rabies. She went on to discuss the benefits of bats and why they are protected wildlife.

“Fruit bats plant new rainforests every day,” Clark said. “Each night, they eat more than double their body weight in fruit. As they fly from tree to tree, their guana falls to the ground. Thanks to bats, we enjoy fruits like pineapple, fig and mango.”

Another unique thing about bats is that they are the only mammals that can fly, and they make up about 25 percent of the mammals on earth. Clark said bats are very much like humans. They are warm-blooded, they have marrow-filled bones, and they give birth to living babies. Mother bats have two breasts and feed their pups milk.

“These animals aren’t rodents,” she said. “They are intimately related to lemurs. We now know that bats share in the primate family tree, so those flying monkeys in the ‘Wizard of Oz’ were not that far fetched.”

Clark said right now there are about 1,386 named species of bats on the planet. When she started working with bats more than 40 years ago, there were only about 600 species.

“It was an amazing accomplishment to study and name all of those species just in the last 30 years,” she said. “And it’s partially because the technology today is so far advanced when it comes to locating and spying on an animal that flies 65 miles an hour and only comes out at night.”

Bats use echolocation and sonar when it comes to navigation and finding their food. Every night, an average bat consumes its body weight in insects – that’s roughly 6,000 to 8,000 bugs. Their appetite for mosquitoes certainly makes a backyard more comfortable.

Bats do not have fixed wings, and can therefore fly in reverse and inversely. When a bat’s mouth is open, it’s not being aggressive, it’s echolocating and making verbal sounds to hunt.

“We can’t hear them when they are communicating, and that makes them appear aggressive, but they’re just searching for dinner,” Clark said.

Bats are protected in nearly every state of the nation. They tend to be nocturnal because they must hide from their many predators, including crows, bluejays, mockingbirds and woodpeckers.

Various species of vampire bats do exist, although their reputation is contrary to their purpose. Draculin is a glycoprotein found in the saliva of vampire bats. It functions as an anticoagulant, inhibiting coagulation factors and thus keeping the blood of the bitten victim from clotting while the bat is drinking.

“Usually farms with vampire bats have chickens, and the bats will feed off their feet at night, and the chickens never even realize it,” Clark said. “I think that’s very considerate of them. The venom from these bats is being researched for potential blood pressure drugs … bats could be saving our lives.”

Clark walked around the auditorium with Amelia the fruit bat, so audience members could get a closer look and take photos. She also brought a Brazilian free-tailed bat, the most common in Florida, to visit Boca Grande that day.

If you want to help increase bat populations, you can install a bat house in your backyard. You’ll attract bats and cut down on pesky insects while giving bats a safe home to raise their pups. Download a free bat house guide at batconservation.org.

Bats may be humanly relocated between August 15 and April 15 each year but must not be disturbed during summer months when they are mating.