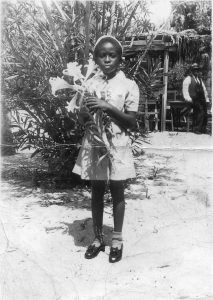 BY MARCY SHORTUSE – Florence T. Jelks Robinson passed away on September 23, 2017. She was born and raised in Boca Grande and was very well known as one of the kindest, smartest women to walk the island. She was a true disciple of Christ in the truest form, and everyone who knew her could see the light shining from her soul.

Born and raised in “South Dock” in the 1930s and ’40s, she had happy times on the island as a child, walking to Fugate’s for ice cream, fishing, crabbing, shrimping, swimming and attending the little elementary school in the middle of a cow field at the south end of the island, where Louise du Pont Crowninshield provided food for the school’s cafeteria. She met people from all corners of the world at the port, and she got to experience small parts of their culture through food, drink and other goods they freely gave to the island children.

Her great-grandfather, James Coleman, was Mrs. Crowninshield’s gardener for 27 years. Her grandfather, Ike Washington, moved here in 1910, at a time when the phosphate business was very prevalent. He had 14 children and opened the first black school on the island in 1915. Her father, Booker T. Washington, worked South Dock for 52 years as everything from an office worker to foreman. He was also a golf caddy for Mrs. Crowninshield. Her mother, Annie, was a devoted homemaker, an excellent cook and was very active in local churches.

Mrs. Jelks said in an interview with the Boca Grande Historical Society that “we were rich girls and did not know it. We could get up every morning and look out over the Gulf and Charlotte Harbor Bay … we saw the ships in the dock there, and we could look out at the Bay and see the sun rise.” 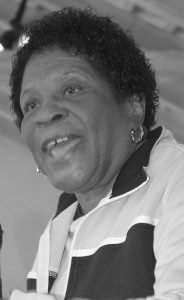 Mrs. Jelks had to leave the island to pursue her high school degree in 1947 – first in Fort Myers and then Arcadia – because at that time black children did not attend Boca Grande High School, but her parents remained on the island until 1975.

Mrs. Jelks went to college on a Lewis State Scholarship with help from Mrs. Crowninshield. She eventually became an educator herself and served as a teacher and principal for many years at schools including Immokalee High School, Pinecrest Elementary in Immokalee and the Bethune School in Immokalee, where she was the principal and coordinator of a federal-state work program enacted in 1974 to give students age 14 to 22 good work experience by providing them with summer jobs. She was known as “The principal who knew principles.”

She has been honored by Collier County as one of 10 women who have made valuable contributions to her community, and she was one of the founders of the Guadalupe Center in Immokalee.

Funeral services for Florence Jelks were held on Friday, Sept. 29 in Immokalee.

Funeral arrangements were entrusted to Hickson Funeral Home Inc., Fort Myers. “I love the island of Boca Grande and always will,” Florence once said. “I’m very fond of the memories I have of it. People were always beautiful, and beautiful to each other.”

Love you much, Florence.