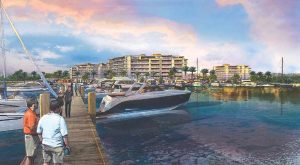 While many have been waiting with bated breath to hear about the outcome of a proposed condominium/restaurant/shopping complex on the old Fishery property, they will have to wait a bit longer for the outcome.

The proposal, which includes a restaurant at the entrance of the property near Gasparilla Road, 6,500 square feet of retail space with parking underneath, a pedestrian plaza, a hotel, and 65-foot-tall condominiums has been made to the county by the Potomac Group of Sarasota.

Many who live in the area consider the major point of contention, other than the fact that the property is historic, to be the height of the condominiums. There is currently a 35-foot cap on buildings along the coast, but the developer’s argument is that the height restriction can be waived if a “public marina” and a certain amount of “open space” are part of the plan.

In October a public meeting was held at The Fishery location, and hundreds turned out to voice their opinion, most being against the development. Representatives for The Potomac Group explained to the curious public that the current zoning code, adopted in 2010, requires an equal amount of open space for every square foot of building space. Currently more than 50 percent of this project is open space, so that requirement will be satisfied. The waterfront section of the code states that if you are within 1,200 feet of the water, the building height is restricted to 35 feet, but it may be up to 65 feet if open space to match it exists.

There are actually two different line items that will be part of The Fishery discussion no rescheduled for February. The first, PA-17-12-38, includes a “Small Scale Plan Amendment to change Charlotte County FLUM Series Map #1: 2030 Future Land Use, from Resource Conservation (RC) to Commercial (COM); for property located at 13000 and 13012 Fishery Road, and 14001 Gasparilla Road, in the Placida Revitalizing Neighborhood; containing 0.78± acres.”

The second item, Z-17-10-35-TDU, is a quasi-judicial matter asking to amend the Charlotte County zoning atlas from “industrial intensive,” “residential multi-family,” “residential single-family” and “environmentally sensitive” to “planned development” for the property.

On Tuesday, Jan. 9 at 9 a.m. in the Hearing Examiner’s Hearing Room, 1500 Monroe Street, second floor, in Fort Myers, the Three Sisters saga will continue as the County will listen to requests for three variances regarding vehicle access to the island just off our coast at Boca Grande Isles.

While there is currently only one house on Three Sisters Island, applicant Three Sisters Island Homeowners’ Association, Inc. is requesting the variances to construct an access point for vehicle traffic onto the island from Lot 99 in Boca Grande Isles.

The second variance request is for relief from the Land Development Code, which requires roads, driveways or parking areas that are 125 feet or less away from a residential subdivision or lots meant for residential use to construct a wall or berm/wall no less than eight feet tall and landscaping to protect the residences.

Another current point of contention is the fact that a bald eagle nest is in the very near vicinity of the proposed island access point. A “bald eagle management plan” was presented last year by the applicant and approved for the site by County commissioners in November of 2017.

The 14 platted lots on Three Sisters have been a point of contention for decades. Originally the landmass was three separate islands, but the land in between them was filled in with spoil during the 1960s construction of the Intracoastal Waterway. Years later Sunset Realty, the former owners of the island, asked the State for permission to create a land bridge from Gasparilla Island to Three Sisters, but the application was denied. A few years later a land bridge appeared, and while some say it was natural accretion, other life-long island residents say it was filled in through covert, manmade means. By 1990 that land bridge was accepted and platted as part of Three Sisters.

While many Boca Grande Isles property owners were against allowing access to Three Sisters in the beginning, they changed their minds after striking a deal which granted many of them rights to build docks on their waterfront property if they would accept the proposal that their neighborhood would be the gateway to the otherwise inaccessible island.

When these variance requests were originally discussed at a meeting in December of 2017, Lee County staff was set to recommend approval. However, after hearing of new information surrounding the request, the examiner’s board decided they needed more time to make a decision and continued the hearing to January 9.

The public is invited to attend the meeting.