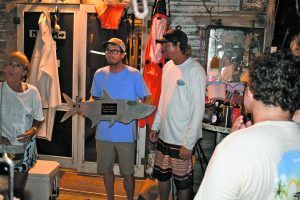 BY MARCY SHORTUSE- One lone tarpon made it to the boat in the 5th annual Red Gill  Invitational Tarpon Tournament held on Saturday, June 20, and one has to wonder if the team on the winning boat didn’t have a little help from a higher power.

Capt. Chase McBride took his team of anglers that included Gordon McBride, Tracy McBride and Nick Morris to victory aboard the Sitarah, the legendary inboard that was owned by Capt. Mark Futch until his death in September of 2018. If there was a person who could transcend the distance between heaven and earth to get a tarpon hook-up, it was Mark.

Tournament coordinator William Woodroffe said there were probably about five other tarpon caught in the tournament – with a few more bites in the mix – but the harassment by sharks was troublesome.

“We lost ours to a shark, we were on the Had’em with Capt. Waylon Mills,” Woodroffe said. “The ones that were lost were all harassed by sharks, I believe.”

Woodroffe said a secondary contributing factor might have been the fact that there were a lot of tarpon offshore spawning, combined with the high concentration of sharks.

“I was fishing with the McBride’s the Thursday prior to the Red Gill, and we encountered at least 500 tarpon 65 miles offshore, and they were still heading northwest,” he said.

In all, there were 21 boats in the field for the tournament.

Earlier in the tournament Sitarah team member Nick Morris had one on prior to the winning fish, released by Tracy McBride, but his didn’t make it to the boat. Woodroffe said they were in the last minute of the tournament and about to go into overtime when Tracy hooked up with her tarpon. Because of that one megalops, the team took home a $10,700 prize. Part of the money was donated to the Gasparilla Island Maritime Museum. Woodroffe said $600 was donated from the tournament proceeds to the museum, as well.

“We considered it to be a very successful event because we all got together and had fun,” he said. “We raised some money for the Gasparilla Island Maritime Museum, and we had a great friend win his first tournament ever in the Pass, Go Chase!”

“We were so excited to get that fish to the boat!” Tracy said. “The Red Gill is a great tournament and William Woodroffe did an awesome job making this tournament season happen.”

Tracy said her family bought the Sitarah from Kathy, Mark’s wife, after he passed.

“We didn’t want to see another Pass boat leave its home in Boca Grande,” she said. “We have people stop and tell us stories of catching their first tarpon on the Sitarah all the time.”

The Red Gill concluded the 2020 tarpon tournament season. For more photos of the tournament, see page 20.